From celebrities to general public, Tamil Nadu came together and prayed on Thursday for the early recovery of veteran playback singer S P Balasubrahmanyam, who continued to be critical and is on life support battling COVID-19 at a city hospital. 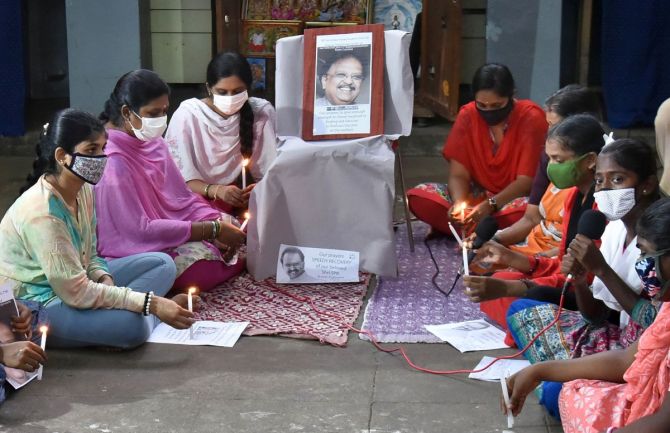 In an emotional show of solidarity, stars of the Tamil film industry such as veteran director Bharathirajaa, music composers Ilayaraja, A R Rahman, lyricist Vairamuthu and actors, including, Rajinikanth, joined the mass prayer at 6 pm while many sung his popular hits.

MGM Healthcare, where 74-year old Balasubrahmanyam is being treated, said he "continues to be critical on ventilator and ECMO support in the Intensive Care Unit of the hospital.

"Our multi-disciplinary team of clinicians have been actively collaborating with national and international experts and continue to closely monitor his vital parameters," Assistant Director (Medical Services) of the hospital Dr Anuradha Baskaran said.

The popular singer, admitted to the hospital on August 5 after he tested positive for coronavirus, was put on the ECMO support, a heart-lung assistance machine, on Wednesday, nearly a week after he suffered a setback in his health.

As people responded to the call for the mass prayer in a big way, young men and children, holding candles lined up on the outer periphery of MGM Healthcare and offered prayers.

Similarly, fans of the singer, popularly known as SPB, lined up in front of the ancient Big Temple in Thanjavur and in towns and cities including Madurai, Salem, Erode and Coimbatore while scores prayed from their homes and recited prayer songs from their religions. 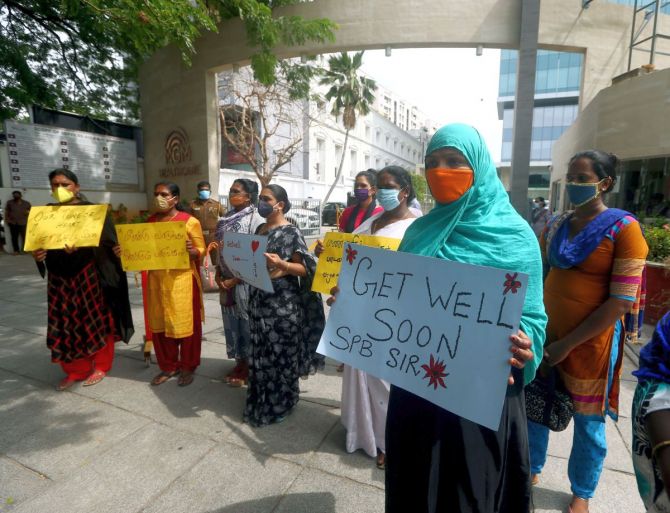 The social media platforms also witnessed scores praying for his recovery with hashtags such as "#GetWellSoonSPBSIR" and "#SPBalasubrahmanyam" trending.

Bharathirajaa, a long time friend of SPB, on Wednesday had given the call for the one-minute silent mass prayer at 6 pm and Rajinikanth and a host of others later appealed to fans and the general public to participate in it.

Many fans sung SPB's popular renditions Nalam Vazha Ennalum Vaazhthukkal (Our wishes for your well-being) and Unnal Mudiyum Thambi (You can do it brother) in a number of places.

Tears rolled down Bharathirajaa's cheeks during the prayer.

He had also appealed to the people to play a song sung by Balasubrahmanyam, praying for his speedy recovery.