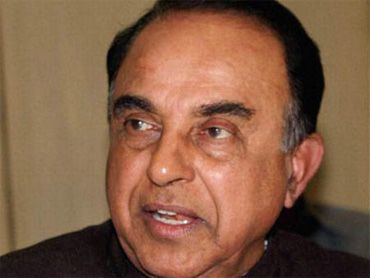 Bharatiya Janata Party leader Subramanian Swamy on Tuesday moved the Supreme Court seeking an order that he be allowed to argue before the Karnataka high court in the hearing of an appeal filed by former Tamil Nadu Chief Minister J Jayalalithaa against her conviction in the disproportionate assets case.

A three-judge bench headed by Chief Justice H L Dattu said that the apex court cannot pass any direction unless there is an order from the Karnataka high court.

"You please go before the Karnataka high court and get an order. We can look into it only after that," the bench said, adding that it did not know as to what transpired before the high court.

During the brief hearing, Swamy said that he was not allowed by the high court to put forth his submissions despite the fact that he was the complainant in the case before the sessions court. He also referred to a provision of the Prevention of Corruption Act and said that a complainant in a corruption case can be treated as a deemed prosecutor.

The bench, however, seemed unimpressed and observed that such submissions can be entertained only when there is a written order of the high court.

On December 18, 2014, the apex court had extended Jayalalithaa's bail by four months in the disproportionate assets case and had asked the chief justice of the Karnataka high court to constitute a special bench to decide her plea expeditiously within three months.

The apex court had also ordered that the hearing in the high court on the appeal filed by the All India Anna Dravida Munnetra Kazhagam chief challenging her conviction and sentence in the case be conducted on a day-to-day basis.

It had also asked senior advocate KTS Tulsi, appearing for Jayalalithaa, who was awarded four years jail term along with a fine of Rs 100 crore in the case by a special court, to provide a copy of documents of the case to Swamy.

The 66-year-old former Tamil Nadu chief minister, who had moved the apex court for bail last year after she was denied relief by the Karnataka high court, had submitted that she had been sentenced to only four years jail and was suffering from various ailments, as grounds for her immediate relief.