The German city of Chemnitz was in lockdown on Saturday after armed police launched a huge manhunt for a Syrian suspected of planning a bomb attack, as the country grapples with a weakened sense of security following recent terror assaults. 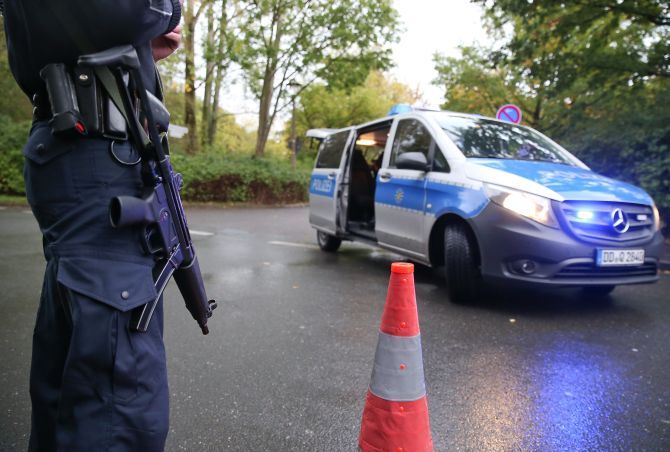 IMAGE: A German policeman guards a check point at a housing area in the eastern city of Chemnitz on suspicion that a bomb attack was being planned in Germany. Photograph: Fabrizio Bensch/Reuters

Police, who told people to stay in their homes, named the suspect as 22-year-old Syrian Jaber Albakr. Photographs posted on social media showed armed police clad in black balaclavas and helmets at an apartment building in the eastern city.

Germany has been on edge after suffering two attacks claimed by the Islamic State group in July -- an axe rampage on a train in Wuerzburg that injured five and a suicide bombing in Ansbach that left 15 wounded.

In the latest alert, police in the state of Saxony issued a search warrant for Albakr, saying he was born in Syria in January 1994.

They said Albakr was wearing a black hooded sweatshirt and was "suspected of preparing a bomb attack". 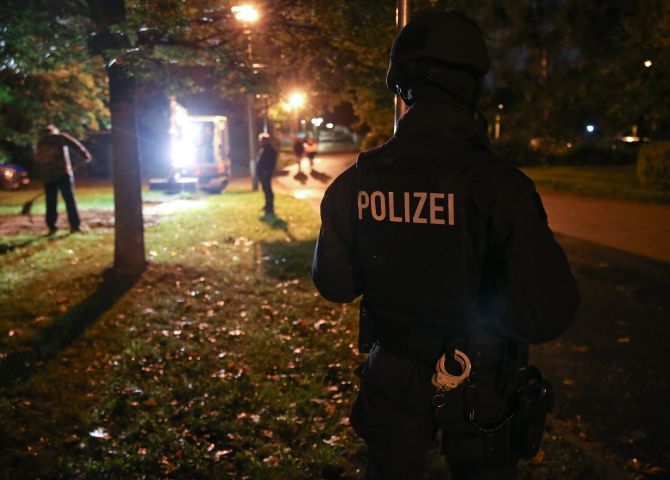 IMAGE: German policemen clear the area of a controlled detonation of explosives at a housing area in the eastern city of Chemnitz on suspicion that a bomb attack was being planned in Germany. Photograph: Fabrizio Bensch/Reuters

A search of an apartment in Chemnitz detected traces of explosives but failed to capture the suspect or find a bomb, a police spokesman said.

"We are carrying out in Chemnitz a large-scale operation due to suspicions that a bomb attack was being prepared," police said on Twitter, urging residents to stay at home.

"The explosion heard in the area was a police entry measure. The wanted person has not been found," police added.

The attacks in July rattled Germans' sense of security and fuelled concerns over the country's record influx of migrants and refugees last year. 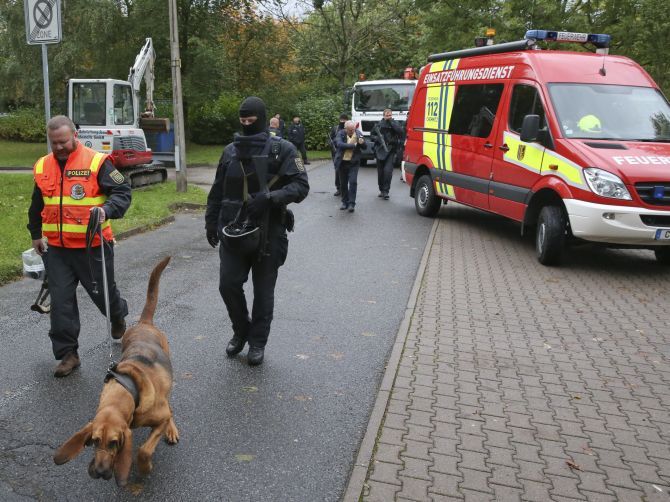 IMAGE: German special policemen SEK search a housing area in the eastern city of Chemnitz on suspicion that a bomb attack was being planned in Germany. Photograph: Fabrizio Bensch/Reuters

German police said previously they had identified 523 people who posed a security threat to the country, around half of whom were known to be currently in Germany.

On September 21 German officials said a 16-year-old Syrian refugee had been arrested on suspicion of planning a bomb attack in the name of IS.

The youngster, thought to have been radicalised only recently, was detained in a special forces operation at a shelter for asylum-seekers in the western city of Cologne, police and prosecutors said.

Initial information gathered from the teenager's mobile phone showed that he had expressed an "unmistakeable willingness" to carry out an attack, Klaus-Stephan Becker of the Cologne police told reporters.

A week earlier, German police detained three men with forged Syrian passports accused of being IS militants and labelled a possible "sleeper cell" with links to the assailants behind the November attacks in Paris.