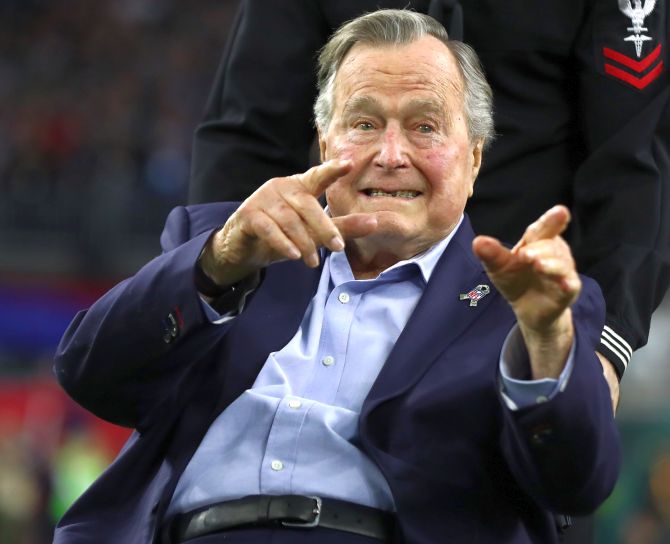 George H W Bush, the 41st United States President who died in Houston on Friday at the age of 94, is to be honoured with a state funeral at National Cathedral in Washington on Wednesday, followed by burial on Thursday in Texas.

President Donald Trump, who has announced a national day of mourning on Wednesday, will send Air Force One to Texas on Monday to bring the remains of the former president to Washington, DC, where his body will lie in state in the US Capitol to enable public an opportunity to bid farewell to their leader.

Bush's office on Saturday announced the official schedule of his state funeral and the related services and ceremonies scheduled in Houston, Texas; Washington, DC; Spring, and College Station, Texas.

The former president will have two funerals -- a state funeral at the National Cathedral and a local funeral at St. Martin's Episcopal Church in Houston.

His office said the state funeral at the Washington National Cathedral will be held on Wednesday morning. The late president's remains will then be returned to Houston on Wednesday afternoon. A funeral service is planned at St. Martin's Episcopal Church in Houston on Thursday morning.

On Thursday, the president's casket will be taken by train to College Station, Texas, accompanied by the Bush family members and close friends. A funeral procession will then travel on George Bush Drive toward the Bush Library complex.

Bush will be buried on Thursday in a family plot behind the George H W Bush Presidential Library and Museum at Texas A&M University, alongside his wife and former first lady, Barbara, and daughter Robin, university officials said in a statement on Saturday.

Trump has signed an executive order directing federal agencies and departments to close on Wednesday 'as a mark of respect' for Bush.

"He was a very fine man," Trump said of Bush. "He led a full life, and a very exemplary life, too."

Trump also signaled his respect by calling off a press conference planned at the G20 summit in Buenos Aires, Argentina.

A plane used as Air Force One will carry Bush's casket from Houston to Washington for memorial services, Trump said.

"Air Force One will be taking myself and a group of our people back to Washington,” Trump said during a meeting with Chinese President Xi Jinping on Saturday evening.

Trump called it 'a special tribute that he deserves very much'.

The state funeral for the 41st president, whose death sparked tributes from around the world and across the political aisle, will be the first presidential funeral since Gerald Ford died in 2006.

Bush's death comes months after the passing of his wife of 73 years, Barbara. The former first lady died in April. Her memorial service in Houston drew hundreds of thousands of people from past presidents to heads of state and historians.

Noticeably absent was Trump, who declined an invitation 'out of respect' for the Bushes.

Prime Minister Narendra Modi, who was in Argentina to attend the G-20 summit, expressed condolence on the death of the former US president.

'Condolences to the Bush family and the people of USA on the passing away of former President George H .W. Bush. He was a leading statesman at a critical period of world history,' Modi tweeted.

'Former President George H W Bush was passionate about strong relations between India and USA. His presence will be sorely missed. May he rest in peace,' the prime minister said.

Meanwhile, floating candles were released into the pond at the George H.W. Bush Presidential Library & Museum on Saturday.

It was a touching moment from the second vigil held at the presidential library in less than 24 hours. For the man known for crafting a thousand points of light, there were hundreds of candles and as well as the people who held them. For many of the students at the Bush School it was a way for them to honor the man that has and will continue to impact their lives.

The former president touched many lives at Texas A&M University. Doors to Bush's presidential museum opened Saturday morning, hours after the announcement of his death. Admission to the library is free through December 9.

Since the announcement of the death of Bush, the Houston community is mourning and paying their respects outside the Bush home in the Tanglewood neighborhood.

Bush was a man people looked up to as a role model, World War II Naval aviator, an oil pioneer and much more. In his neighborhood, people knew him as a husband, a good neighbor, and a kind citizen.

President Bush was suffering from Parkinson's disease that forced him to use a wheelchair in recent years, and he had been in and out of hospitals in recent months as his health declined. 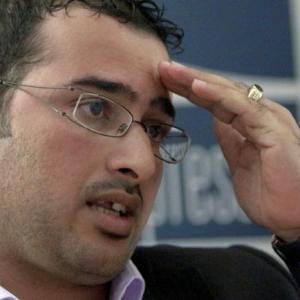 Bush's shoe-thrower is running to be Iraq's prez