A third, navy-heavy theatre, called the “maritime command” will be responsible for the security of the Indian Ocean Region (IOR); and an island command, already functional and called the Andaman & Nicobar Command (ANC), would project power into the eastern Indian Ocean. 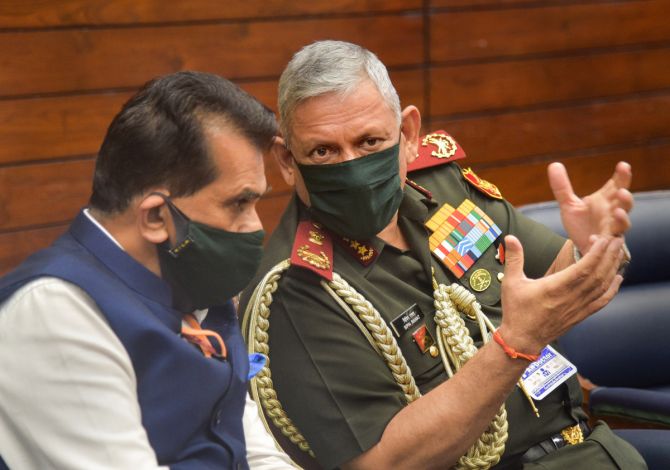 These are warfighting entities, containing army, navy and air force components, that would fight jointly to focus and synergise the combat power of all three services.

In what would be the boldest move since Independence, Rawat said the 17 single-service commands that currently exist would be combined into just four geographical commands, each with elements from all three services.

A third, navy-heavy theatre, called the “maritime command” will be responsible for the security of the Indian Ocean Region (IOR); and an island command, already functional and called the Andaman & Nicobar Command (ANC), would project power into the eastern Indian Ocean.

Rawat was speaking in New Delhi to an audience of writers and intellectuals at the India Inter­national Centre on Wednesday.

The frontier with China is managed by a similar multiplicity of commands. The Central Air Command, located in Allahabad, has a role in managing both the western and northern theatres, while the Eastern Air Command at Shillong is responsible for the northern theatre.

Describing these joint theatre commands, Rawat said the one looking after Pakistan would have a commander, whether from the army, navy or air force -- who is best suited for the job. He would have subordinate commanders from the other two services, who could offer him advice specific to their respective services.

“There is also a thought process about co-opting the central armed police forces (CAPFs) for tasks with the army. The CAPFs train with us and have weapons systems that are as good as what the army has. So they can take on some defensive tasks and, thereby, relieve the army for carrying out offensive tasks.”

The CDS said the military was also looking at creating a single theatre command for managing the threat from China. This theatre commander would also have under him elements from the Eastern Naval Command and IAF components.

Rawat said the navy’s two combat commands -- the western and the eastern naval commands -- would be integrated into a single headquarters. Called the National Maritime Command, it would be responsible for the security of the Arabian Sea, Bay of Bengal and the northern Indian Ocean.

The fourth joint theatre command would be responsible to defend India’s island territories, which Rawat called “islands of resistance”.

The fifth theatre, said Rawat, comprises India’s air space, which is increasingly contested by manned and unmanned aircraft, missiles, rockets and artillery shells, which go as high as 15 km when they are fired. “With the air chief engaged in multiple other tasks, the solution being considered is to have a dedicated air force commander-in-chief, responsible for the air space above us,” said Rawat.

The sixth joint commander would be in charge of cyber war. “Frontal attacks with tanks and infantry may not be the way the next war is fought. Instead, the troops in the rear may become the first to come under attack -- a cyberattack launched by the enemy,” said Rawat. “The adversary may force you to join battle in the manner that suits him. So we need a space agency.”