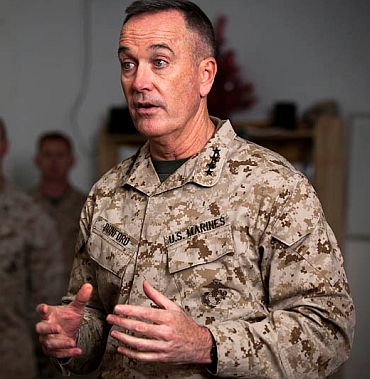 Gen Dunford would replace Gen John Allen, who has been nominated as the next Supreme Allied Commander Europe, a White House announcement said.

"For more than a year, General Allen has served with distinction as the Commander of US Forces and NATO International Security Assistances Forces in Afghanistan, seeing us through a critical period in our military efforts and in Afghanistan's transition," Obama said.

"I have personally relied on his counsel and am grateful for his devotion to our national security and to the safety of the men and women with whom he serves," Obama said, adding that under Allen's command, the US has made important progress towards its core goal of defeating Al Qaeda and ensuring they can never return to a sovereign Afghanistan.

"Working with our Afghan partners and international civilians, the forces under Gen Allen's command have moved forward with a transition to Afghan Security Forces, who will take the lead for security across the country next year," he said.

Observing that very difficult work remains ahead in Afghanistan, Obama said to lead those efforts he will nominate General Joseph Dunford as the new ISAF Commander (COMISAF).

Dunford currently serves as the Assistant Commandant of the US Marine Corps.

"I have full confidence in his extensive experience, strategic leadership and vision. If confirmed by Senate, he will lead our forces through key milestones in our effort that will allow us to bring the war to a close responsibly as Afghanistan takes full responsibility for its security," Obama said.

If confirmed by the Senate, Allen will replace Admiral Jim Stavridis as the SACEUR in the Spring, the statement said.

"During his tenure in Afghanistan, General Allen established his credibility with our NATO allies and ISAF partners as a strong and effective military leader," Obama said and thanked Admiral Stavridis for his steadfast service on behalf of the United States and NATO.

"He has played a critical role in helping to make NATO a stronger Alliance and ensuring we have the capabilities and partnerships to meet the challenges of the next century," Obama said in the statement.