Gehlot writes to Modi over bid to 'topple' his govt, names Shekhawat 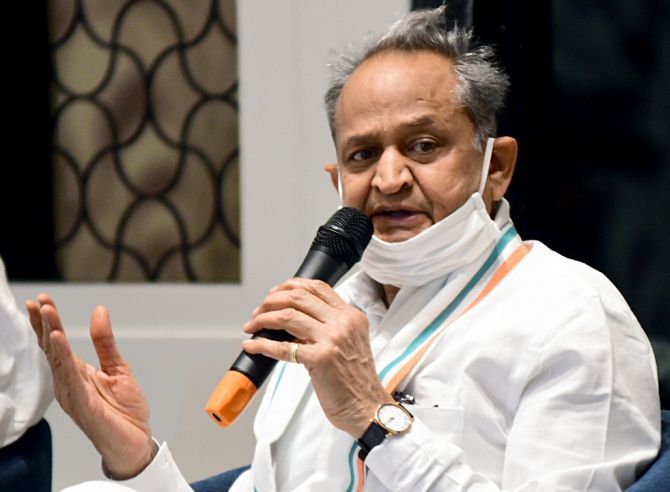 In the letter written Sunday, he accused Shekhawat, other Bharatiya Janata Party leaders and some 'overambitious leaders' of his own party for being involved in the alleged attempt to bring down his Congress government.

'I am not aware to what extent this is in your knowledge or if you are being misled,' Gehlot said in the letter released to the media on Wednesday. 'History will not forgive those who participate in this deed.'

Gehlot is caught in a power tussle with Sachin Pilot, now sacked from his post as deputy chief minister.

He said the alleged attempt to bring down the Congress government in the state insulted the people's mandate and was an open violation of constitutional values.

He cited the examples of Karnataka and Madhya Pradesh, the two states where Congress lost power over the past year while alleging horse-trading of MLAs by the BJP.

Gehlot said for some time there have been attempts to bring down elected governments, ignoring the spirit of the anti-defection law brought in by the Rajiv Gandhi government and the amendment introduced by the Atal Bihari Vajpayee government.

He said protecting lives is the only priority during the COVID-19 pandemic and in such a situation attempts are being made to topple the elected government in Rajasthan.

"In this act, Union minister Gajendra Singh Shekhawat, other BJP leader and some overambitious leaders of our party are involved," he said.

He also named dissident Congress leader Bhanwarlal Sharma who he said had tried to bring down Bhairon Singh Shekhawat's BJP government in Rajasthan.

Gehlot said he had at that time protested against the move.

The Congress has suspended Bhanwarlal Sharma and another MLA, Vishvendra Singh, from the primary membership of the party for their alleged involvement in the conspiracy.

Gehlot said he is saddened that a ruling party at the Centre could ignore its priority of managing the coronavirus pandemic and is instead play the 'main role' in bringing down a Congress government.

He said similar allegations were levelled in connection with Madhya Pradesh and 'your party was defamed across the country'.

The chief minister said he firmly believed that healthy democratic and constitutional values will finally win and his government will complete its tenure while delivering good governance.