Fearing 'horse-trading' ahead of the assembly session, the Rajasthan Congress on Friday shifted the party MLAs to Jaisalmer from Jaipur where they had been staying at a hotel for over a fortnight. Gehlot alleged that the MLAs, their family members and acquaintances were getting threat calls and pressure was being build on them after the announcement of the assembly session from August 14.

He said the 'rate for horse-trading has increased after the governor announced the assembly session date'.

Gehlot said his party has undertaken a campaign to save the democracy in the country.

Targeting Home Minister Amit Shah, the chief minister said he took the Bharatiya Janata Party leader's name as he comes (on the forefront) 'where the government is toppled'.

Talking to reporters at the Jaipur airport before leaving for Jaisalmer, the chief minister said there will be no compromise with the governance as he and his ministers will remain in Jaipur most of the time.

"The state government has performed well in the coronavirus management. Our efforts have been appreciated all over. We have maintained law and order situation as well but saving the government is also important.

"When the Government of India and home ministry is (running) after, public is supporting us," he said.

AICC general secretary Avinash Pande said it is the 'effort to protect the democracy'.

"The victory will be of the Constitution and democracy," he said.

State Transport Minister Pratap Singh Khachariyawas said the MLAs were shifted to Jaisalmer so that they can be kept united.

He said the chief minister's strategy is that not a single MLA should be poached.

Party leaders claimed over 100 people, including party leaders, Congress MLAs and allies, have gone to Jaisalmer in five flights. Three flights took off in the first round and two in the second.

The chief minister and other senior leaders went to Jaisalmer in the second round.

On reaching Jaisalmer, the MLAs were shifted to hotel Suryagarh amid tight security arrangements.

"We are going to Jaisalmer for a change," Congress MLA Prashant Bairwa said at the Jaipur airport.

Targeting the Congress and the chief minister, the BJP asked why the party has no trust in its MLAs.

"Gehlot took the MLAs to Jaisalmer. What after it? Pakistan lies ahead," state BJP chief Satish Poonia said.

'When the party's MLAs are united and all is well, then why there is a need to keep them together? Disclose the name who is saleable,' he said in a statement.

The decision to move the MLAs came a day after Gehlot indicated he will seek a confidence vote when the assembly convenes on August 14 and claimed the money offered to the MLAs to switch sides had increased sharply ahead of the session.

The Congress and other supporting MLAs of the Ashok Gehlot camp had been staying at the Jaipur hotel since July 13 after Sachin Pilot and 18 other Congress legislators rebelled against the government, triggering a political crisis.

Accusing the BJP of adopting double standards over the merger of six Bahujan Samaj Party MLAs with the Congress in Rajasthan, Gehlot on Friday reminded it about the induction of four Telugu Desam Party Rajya Sabha MPs into the saffron party last year.

Six BSP MLAs defected to the Congress in September last year which was initially challenged by BJP MLA Madan Dilawar before the assembly speaker in March this year and now he and the BSP have filed separate writ petitions in the Rajasthan high court against the merger.

'The BJP got four MPs of TDP merged with it overnight in Rajya Sabha. That merger is right and the merger of six MLAs with the Congress in Rajasthan is wrong,' Gehlot tweeted in Hindi.

He asked what had happened to the BJP's 'Chaal-Charitra-Chehra' (conduct and character) at that time?

In Andhra Pradesh, four of the six Telugu Desam Party members of Rajya Sabha had joined the BJP last year.

"The merger can take place with 2/3 majority. Here, all the six MLAs had merged so therefore (BSP supremo) Mayawati's complaint is not justified because it was not about two MLAs, it was about all the MLAs," Gehlot had said on Thursday.

"This is the game of BJP which the entire country is watching. Some of our colleagues are involved in this," he had said.

The high court has issued notices to the speaker, secretary of the assembly and the six MLAs.

The merger of six MLAs -- Sandeep Yadav, Wajib Ali, Deepchand Kheria, Lakhan Meena, Jogendra Awana and Rajendra Gudha to Congress in September 2019 -- was a boost to the Ashok Gehlot-led government as the tally of the Congress increased to 107 in the house of 200. 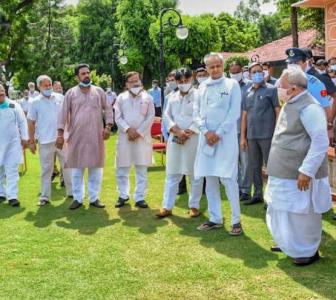 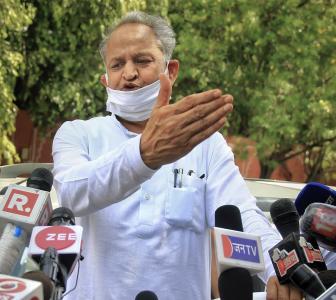 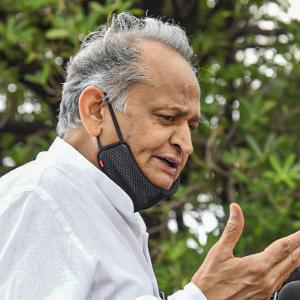