The income tax department is conducting searches in four cities, including Delhi and Jaipur, in connection with a tax evasion case against a Rajasthan-based hydropower infrastructure company and some other business groups, officials said on Monday. 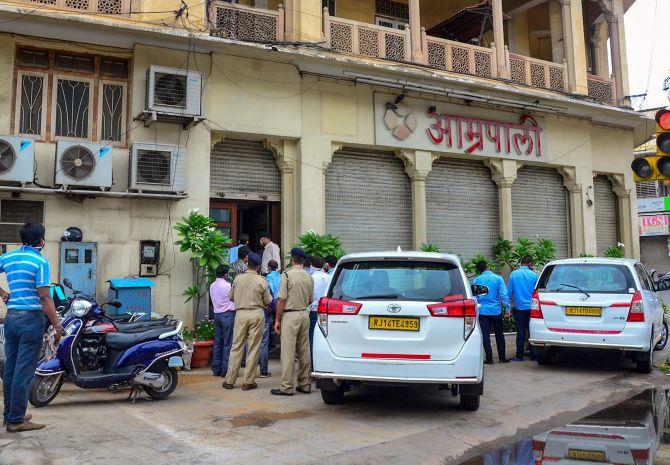 The raids come at a time when Rajasthan is witnessing an intense power tussle between chief minister Ashok Gehlot and his deputy Sachin Pilot.

While official sources in the tax department did not confirm if those searched are linked to the Congress leadership in the state, party leaders in Delhi and Rajasthan questioned the timing of the raids and condemned the action.

Congress sources in Rajasthan said the premises linked to party leaders Rajiv Arora and Dharmendra Rathore are being searched.

I-T teams were seen visiting the Amrapali jewellers showroom in Jaipur, stated to be owned by Rajiv Arora.

While Arora is the vice president of the Rajasthan Congress, Rathore is a former chairman of the state seed corporation.

Income tax officials said the tax raids have been launched early morning in Delhi, Jaipur, Mumbai and Kota and premises of the promoters and owners are being covered.

At least 80 tax sleuths apart from police officials are part of the action, they said.

They said the department initiated action on the basis of inputs of alleged huge cash transactions and under-reporting of profits by the hydropower group.

The business house has interests in hydro mechanical equipments and was awarded a contract to build a dam in Rajasthan in 2018.

The department also searched a luxury hotel whose shareholder is one R K Sharma.

The ED is also probing Sharma on charges of alleged violation of forex laws related to remittance of over Rs 96 crore from Mauritius.

The ED had also questioned some people in this case few days back, they said.

He charged that the Income Tax department, Enforcement Directorate and Central Bureau of Investigation are the BJP's “frontal departments”, but asserted that such raids will not topple the government

Amidst the crisis in Rajasthan, the Congress had on Sunday dispatched two of its senior leaders as central observers to Jaipur to talk to its MLAs.