Source: PTI
May 05, 2011 18:13 IST
Hardline Hurriyat Conference leader Syed Ali Shah Geelani has called for funeral prayers on Friday for terrorist Osama bin Laden, who was shot dead in Pakistan on May 2 by a US navy team.

Geelani has appealed to imams and people to hold funeral prayers in absentia for bin Laden after the Friday prayers in the afternoon, a Hurriyat spokesman said in a statement.

Terming him a 'martyr', Geelani said bin Laden was not just one person but "he represented a thinking which opposed foreign occupational forces".

"His heart bore the pain of the entire Muslim ummah (community). He gave up his life of comfort to fight for their cause," the statement said.

The separatist leader said he wanted to participate in the funeral prayers but he has been placed under house arrest by the police since early this morning.

Geelani appealed to people to pray for the liberation of Kashmir, Palestine, Iraq and Afghanistan from the occupation of forces. 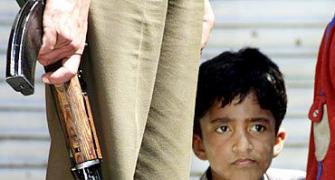