The Congress on Saturday announced a three-phase campaign against price rise, "Mehngai-mukt Bharat Abhiyaan", as part of which party workers will ring bells, garland LPG cylinders and beat drums besides organising rallies and marches across the country from March 31 to April 7. 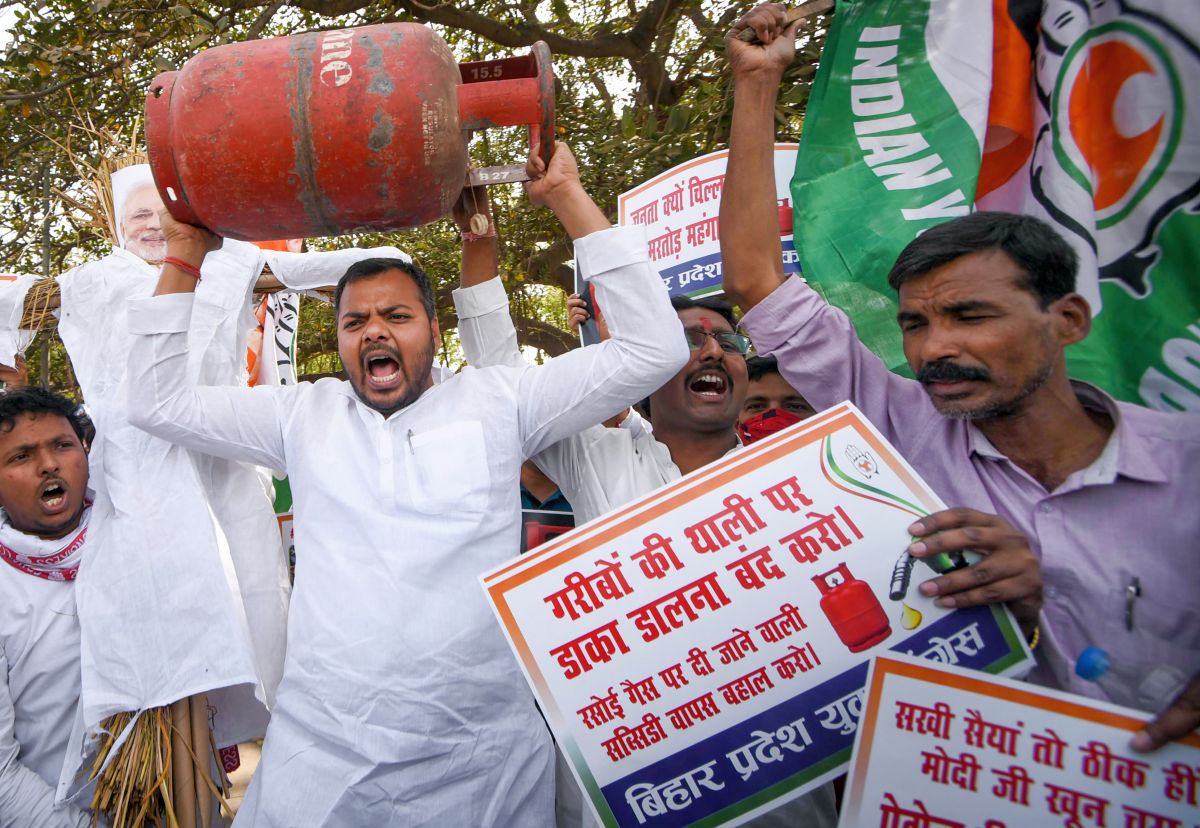 The agitational campaign was finalised at a meeting of Congress general secretaries and state in-charges, where they also reviewed the party's membership drive. The meeting comes days after the party's humiliating defeat in the Assembly polls in five states.

The Congress' membership drive that started on November 1 last is both in online and physical mode and will continue till March 31. The membership has crossed 1.2 crore, according to a party source.

Providing details of the agitational programme, Congress general secretary and chief spokesperson Randeep Surjewala told a press conference here that in the first phase of the campaign, Congress workers and common people will protest outside their houses and at public places on March 31.

He said people will garland LPG cylinders, beat drums and ring bells to highlight the issue of inflation and seek to draw the attention of the "deaf BJP government against the insurmountable increase in the prices of cooking gas, petrol and diesel.

"The Congress president, in consultation with the party general secretaries and state in-charges, has decided to champion the people's cause in a three-phased programme -- Mehngai-mukt Bharat Abhiyaan," Surjewala said.

From April 2 to April 4, the Congress, along with NGOs, religious, social organisations and resident welfare bodies, will organise dharnas and marches at the district level across the country, he added.

On April 7, the party will organise "Mehngai-mukt Bharat" dharnas and marches at all state headquarters with the help of social and religious organisations, NGOs and people, Surjewala said.

He said party leaders Rahul Gandhi and Priyanka Gandhi along with other senior leaders will also participate with the people in these protests.

"The people of India have been betrayed, duped and deceived by the (Narendra) Modi government. After keeping the prices of petrol, diesel, gas cylinders, piped natural gas (PNG) and CNG unchanged for 137 days to secure the votes of people, the last one week has been a nightmare for every household," he added.

Surjewala pointed out that the Centre again hiked the petrol and diesel prices by 80 paise per litre on Saturday -- the fourth hike in five days -- totalling Rs 3.20 per litre.

Surjewala claimed that the Modi Government has earned Rs 26 Lakh Crore in eight years by increasing Excise Duty on Petrol and Diesel alone.

Since the Lockdown two years ago, the extent of "extortion and profiteering" by repeated increases in prices and Excise Duty on Petrol and Diesel has surpassed all forms of exploitation, he alleged, adding that there has been an increase of Rs 29.02 for Petrol and Rs 27.58 for Diesel per litre since 2020.

Surjewala asked does this government want that women should stop cooking on gas as its price is unaffordable and start using traditional firewood for cooking.

He also said the party workers and people will beat drums and ring bells only to "awaken the Modi government, which drunk with power has turned deaf", and is not hearing the people's voices and is not concerned with their woes due to price rise.

"Modi ji asked people to beat 'thalis' during Coronavirus pandemic, but we are beating them only to awaken this deaf government."

The Saturday meeting also discussed the current political situation in the country.

Various leaders presented reports about the membership drive in their states and said it has yielded very encouraging results.

Asked about problems due to the online drive, Surjewala said wherever there are problems physical membership drive is on.

The meeting was convened at the behest of Congress chief Sonia Gandhi and among the prominent leaders of the party who attended the meeting were K C Venugopal, Priyanka Gandhi Vadra, Oomen Chandy, Mukul Wasnik, Tariq Anwar, Surjewala, Ajay Maken and treasurer Pawan Kumar Bansal.