Breaking his silence, the male friend of the Delhi gangrape victim on Friday night severely criticised the Delhi police for its tardy response and bemoaned public apathy after both of them had been badly injured and thrown out of the bus after she was gangraped by six men.

He said that they had been lured into boarding the private bus on December 16 night at Munirka in South Delhi. "The bus occupants had everything planned. Apart from the driver and helper, others behaved like they were passengers. We even paid Rs 20 as fare. Then they started teasing my friend and same led to a brawl. I beat three of them up but then the rest of them brought an iron rod and hit me. Before I fell unconscious, they took my friend away," he told Zee News in an interview telecast on Friday night.

"From where we boarded the bus, they moved around for nearly two and a half hours. We were shouting, trying to make people hear us. But they switched the lights of the bus off. We tried to resist them. Even my friend fought with them, she tried to save me. She tried to dial the police control room no.100, but the accused snatched her mobile away," the male friend said.

He said before throwing them from the bus, "They snatched our mobiles and tore off our clothes in order to destroy any evidence of the crime".

Recounting the sequence of events on that fateful night, he said, "After throwing us off the bus, they tried to mow us down but I saved my friend by pulling her away in the nick of time. We were without clothes. We tried to stop passers by. Several auto rickshaws, cars and bikes slowed down but no one stopped for about 25 minutes. Then, someone on patrolling stopped and called the police," he said.

Contradicting the police claims that they acted swiftly after being informed, he said three Police Control Room vans arrived at the scene only after about 45 minutes and wasted time in deciding under which police station's jurisdiction the case fell.

The youth claimed that nobody, including the police, gave them clothes or called an ambulance. "They were just watching us," he said, adding that after repeated requests, some gave him a part of a bed sheet to cover the girl.

He rued that no one from the public came forward to help. People were probably afraid that if they helped us, they would become witnesses to the crime and would be asked to come to police stations and courts, he said.

The Delhi police on Friday night registered a case against Zee News at the Vasant Vihar police station for airing the interview with the male friend, who is lone witness of the crime.

The case was filed under Section 228 (A) of the Indian Penal Code, which pertains to disclosure of identity of victim of certain offences, including rape, the Delhi police spokesperson Rajan Bhagat said.

The 23-year-old medical student was gangraped and brutally assaulted  when the the two boarded a bus around 9 pm Munirka area after watching a movie in a cinema hall on December 16.

The girl was later taken by a police patrol to a government hospital where she battled for life for several days before being flown to Singapore in an air ambulance for specialised treatment. However, she passed away on December 29.

The horrendous crime led to widespread public protests in several parts of the country and vocal demands for toughening laws against rape.

The police had chargesheeted five men, including the driver of the bus and his brother, in the case and accused them of various crimes like murder, attempt to murder, gangrape, kidnapping and unnatural offences.

The sixth accused is a juvenile as he is a little under 18 although he is to be subjected to a bone density test to verify his age. He will be tried by the Juvenile Justice Board if he is a minor.

The male friend said he had to carry the profusely bleeding girl to the PCR van on his own as the policemen didn't help them.

"Even at the hospital, we were made to wait and I had to literally beg for clothes. I borrowed a stranger's mobile and called my relatives, but just told them that I had met with an accident. My treatment started only after my relatives came," he said.

"When I met my friend (the girl) in the hospital, she was smiling. She was able to write and was positive. I never felt that she did not want to live," he said.

When she gave the first statement to the lady SDM, only then I came to know what had happened with her. I couldn't believe what they did to her. Even when animals hunt, they don't mete out such brutality to their prey," he said.

The youth said the occupants of the bus, which had tinted windows and curtains, had laid a trap for them. The Delhi police refuted the youth's claim that PCR reached the spot late.

The police control room received the call at 10.22 pm and PCR-Z-54 was directed to the spot. Meanwhile, another PCR van E-42 reached the spot on its own at 20.26 pm, the police spokesperson said late on Friday night.

He said PCR-z-54 reached the spot at 10.28 pm. The victims were taken at 10.31 pm and reached Safdarjang Hospital at 10.55 pm, Bhagat said. He said all the PCR vans were fitted with GPS systems and it cannot be tampered with. 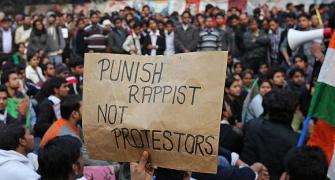