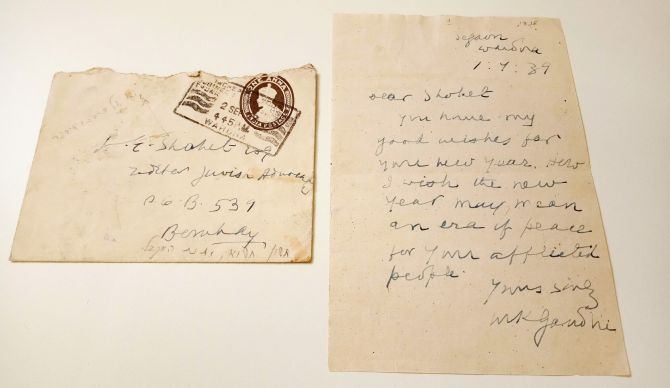 IMAGE: A short letter handwritten by Mahatma Gandhi was released by the National Library of Israel (NLI), in Jerusalem, on Sunday. Photograph: PTI Photo

A short handwritten letter by Mahatma Gandhi 80-years-ago on the same day the World War II broke out, wishing the 'afflicted (Jewish) people' an 'era of peace', has been unveiled for the first time by the National Library of Israel.

Gandhi wrote the letter to Head of the Bombay Zionist Association (BZA) A E Shohet, who was trying to enlist support of Indian leaders in favour of the movement to establish a national home for the Jewish people.

Written on the occasion of Rosh Hashana (Jewish new year) on September 1, 1939, the letter also marked the beginning of the World War II when Germany invaded Poland, setting the stage for the despicable atrocities of the Holocaust.

"The timing of the greeting reflects the extent to which Nazi persecution of Jews was of concern to global citizenry at the time. In hindsight, it also presents a chilling portent of the horrors to come," said Zach Rothbart, in charge of communications at National Library of Israel (NLI).

Gandhi's greetings came to light as part of a major initiative launched by the NLI, with support from the Leir Foundation, to review and describe millions of items in its archival collections, including personal papers, photographs and documents from many of the 20th century's most prominent cultural figures.

The letter, for the first time, has been posted online by the NLI.

'Dear Shohet, You have my good wishes for your new year. How I wish the new year may mean an era of peace for your afflicted people. Yours sincerely, M K Gandhi,' the letter reads.

Shohet was an Indian Jew from the Baghdadi community in Bombay. He headed BZA and served as the editor of 'The Jewish Advocate'.

Perturbed by Gandhi's perceived silence on the question of persecution of the German Jewry and the Indian National Congress' neutral attitude on the matter, Shohet had been pursuing Indian leader to win him over on his side.

Gandhi, who often came under criticism for his reluctance to declare his views on the Arab-Jewish question in Palestine and the persecution of German Jews, in an article The Jews published on November 26, 1938 in the Harijan newspaper suggested 'satyagraha' or non-violent resistance as his solution to both the problems.

He suggested that the Jews in Mandatory Palestine ought to 'offer satyagraha in front of the Arabs and offer themselves to be shot or thrown into the Dead Sea without raising a little finger against them', Rothbart quoted him as saying in a press release.

'My sympathies are all with the Jews... If there ever could be a justifiable war, in the name of and for humanity, war against Germany to prevent the wanton persecution of a whole race would be completely justified. But I do not believe in any war...,' Gandhi is quoted as saying.

The article in the Harijan was harshly criticised by leading intellectuals of the time including Martin Buber and Judah Magnes, who viewed Gandhi's statements as unfavourable to Zionism and not satisfactory vis-a-vis the situation of the German Jewry.

Shohet in his response to the Harijan article in 'The Jewish Advocate' pointed out that there was one fundamental difference between the Jews in Europe and the Harijans in India, the former had no home.

He also argued that Jews had practised non-violence for two millennia, and yet their persecution persisted.

The Jewish community in India is also said to have been disturbed by the attitude of the Indian National Congress leaders.

Shohet is said to have reached out to Hermann Kallenbach, a wealthy Jewish Zionist architect and carpenter who Gandhi referred to as his 'soulmate'.

A recently published book by Shimon Lev titled 'Soulmates: The Story of Mahatma Gandhi and Hermann Kallenbach brings out the close association between the two friends.

Kallenbach had funded the establishment of Tolstoy Farm, the South African prototype for the Gandhian ashram, where he and Gandhi lived together sharing a kitchen and seemingly endless conversations about the proper path and meaning of life.

"Your portrait (the only one) stands on the mantelpiece in my room... even if I wanted to dismiss you from my thoughts, I could not do it," Gandhi once wrote to Kallenbach as per the book.

In March 1939, Kallenbach arranged for Shohet to interview Gandhi, which he did over the course of four days at Gandhi's ashram in Wardha.

According to a letter Shohet wrote to Eliahu Epstein (who later became known as Eliahu Elath and served as Israel's first Ambassador to the United States), the 'interview was discouraging because although Gandhi to a certain extent understood the idealism of the Jews' wish to return to Palestine, he still saw the Palestine question from the Muslim point of view'.

Kallenbach and Shohet never convinced Gandhi to become an active defender of European Jewry nor a Zionist, and he remained steadfast in his belief that non-violence and passivity could solve all problems.

Harinder Mishra in Jerusalem
© Copyright 2022 PTI. All rights reserved. Republication or redistribution of PTI content, including by framing or similar means, is expressly prohibited without the prior written consent.