Mahatma Gandhi is my ideal in politics: Rahul Gandhi

Congress general secretary Rahul Gandhi praised Mahatma Gandhi and revealed that the Father of Nation was his ideal.

Addressing students of the Devi Ahilya University in Indore on Tuesday: Rahul said: "If I have any ideal in politics, that is Gandhiji for me. And as I progress in politics, I have appreciated him all the more. People say Gandhiji was irrelevant in his theory, and this thinking is impractical and cannot be applied in politics. But as I proceed further in politics and as far as my thinking goes, my faith in Gandhiji has increased every bit."

He also mentioned that he was convinced about the relevance of Gandhian thoughts vis-à-vis the Indian system of governance. He also criticised those who referred to Gandhi as impractical in his approach towards running

this interwoven bureaucracy and even termed him as one of the finest creators of modern India.

The MP also spoke about poverty and contended that till the poorer sections of the nation are not given a lead on the road of progress, India would never be able to match other developed nations of the world. Speaking on the academic scenario, he noted how he was astonished to learn that among the masses, education meant English and all wished to learn this global link language.

The Amethi MP also encouraged students to take active part in public life including the political system. The objective of this visit had been to prompt the students understand politics and take active part in it since he viewed the progress of the nation lies in the involvement of the youth as the emerging force.
Source: ANI
Related News: Gandhiji, Rahul Gandhi, Devi Ahilya University, Mahatma Gandhi, Amethi MP
SHARE THIS STORY
Print this article
'Each govt tries to push its people into agencies'
Visit to Dalits only highlighted: Rahul Gandhi
'Rahul Gandhi violated all security norms'

Rahul Gandhi kicks off 'Mission UP 2012' 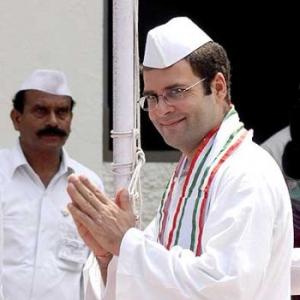