Targeting Rahul Gandhi against the backdrop of large-scale rotting of foodgrains, Bharatiya Janata Party president Nitin Gadkari on Thursday wondered whether the Congress leader did not see this happening when he visited the shanty of a poor woman Kalawati.

Rahul had drawn the country's attention to the plight of Kalawati Bandurkar, a widow of a farmer, recounting her tale in Parliament in 2008 after visiting her home in Vidharba region.

"When Rajkumar (a reference to Congress leader Rahul Gandhi) eats food at the house of Kalawati, can't he see the rotten foodgrain and the plight of the farmers," he asked.

Attacking the Congress, he said while the party claims to work on slogans like 'garibi hatao', it was actually trying to "wipe out" the poor.

The BJP leader said farmers were forced to commit suicide as they were not getting appropriate income for their produce.

The Supreme Court has also taken serious note of large-scale rotting and wastage of food grains across the country due to lack of storage facilities and observed that not a single food grain should be wasted. 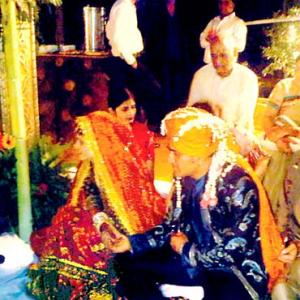 Pune: Congress workers bash up each other