Shiv Sena supremo Bal Thackeray likened BJP president Nitin Gadkari's plight after his remarks on Swami Vivekananda to that of L K Advani, who had to step down as chief of the saffron party following his comments hailing Pakistan founder Mohammed Ali Jinnah as secular.

Thackeray, who had recently backed a beleaguered Gadkari in the aftermath of allegations of dubious funding of his companies, said the BJP chief would be having doubts about receiving support from even the RSS this time.

"Advani lost ground over his Jinnah remarks and Gadkari has been jolted because of the Swami Vivekananda comments row," Thackeray said in an editorial in party mouthpiece 'Saamana'.

"Gadkari has clarified that he has not equated Vivekananda with Dawood. However, not a single leader of his party has taken cudgels on his behalf," Thackeray said.

"Even Gadkari must be doubtful whether RSS would stand by him over his remarks on IQ of Swami Vivekananda and Dawood Ibrahim," Thackeray added.

Speaking at an award ceremony in Bhopal on November 4, Gadkari said the IQ level of Vivekananda and Dawood could have been the same, but the spiritual leader used it for nation building and the underworld don for pursuing crime.

"As per psychology if we can compare the IQ level of Swami Vivekananda and that of Dawood Ibrahim, then it could have been the same. But Vivekananda used it in nation building, brotherhood and spiritualism while Dawood used that in excelling in crime world," Gadkari had said.

"Gadkari's condition is like "Sukh ke sab saathi, dukh mein na koi" (everyone to share happiness but none to share sorrow), Thackeray said in the editorial.

Advani's description of Jinnah as a "secular" leader during his 2005 visit to Pakistan had angered RSS and he had to step down as BJP president.

The Sangh has disapproved of Gadkari's comments on Swami Vivekananda.

"People like Swami Vivekananda are very respected people across the world. So when we talk about them...we have to keep in mind that sentiments of millions of people are attached to them and we should be careful about that," RSS spokesman Ram Madhav had said on the controversy. 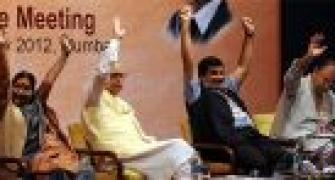