Union Minister Nitin Gadkari on Thursday launched the construction work on Zojila tunnel and exuded confidence that the strategic project which will provide all-year connectivity between Srinagar valley and Leh will be completed ahead of schedule. 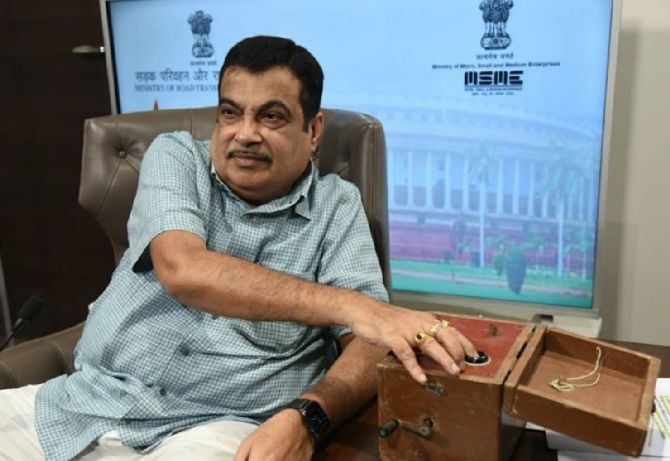 "It is a moment of pride for India. I am confident that it will be completed in four years and the Prime Minister will inaugurate it before the code of conduct for the next Lok Sabha elections," the Road Transport, Highways and MSMEs minister said.

The project has a completion schedule of six years.

Gadkari was addressing an event after the virtual launch of construction work of the 14.15-km Zojila tunnel project through ceremonial first blast.

The project holds strategic significance as Zojila Pass is situated at an altitude of 11,578 feet on the Srinagar-Kargil-Leh National Highway and remains closed during winters due to heavy snowfall.

Once completed, the tunnel, projected as Asia's longest, would reduce the travel time from 3 hours to 15 minutes with avalanche-free travel on the Srinagar-Leh section of NH1.

He said the re-modelling of the project has resulted in savings to the tune of over Rs 4,000 crore to the public exchequer without any compromise on safety, security and quality.

The Minister emphasized that with honest efforts, "we can take our country forward at lower costs."

"The watershed moment in the road history of the UTs of Jammu & Kashmir & Ladakh is finally here... One of the most difficult stretches to drive and build, the geo-sensitive Zojila stretch is strategically important to the defence of our country.

"Zojila tunnel will not only provide all-weather connectivity between Srinagar, Drass, Kargil and Leh but it will also further strengthen the economic and social-cultural integration of both the Union Territories," Gadkari said.

This tunnel when completed will be a landmark achievement in the history of modern India, the Minister said.

"It will also be of great importance to the Defence of the country, in view of the fact that massive military activities along our borders in Ladakh, Gilgit and Baltistan regions are taking place," Ministry of Road Transport and Highways (MoRTH) said.

The travel tourism sector will get a maximum boost and generate employment for the locals, the Minister said and added: "We are ensuring robust safety measures in case of any emergency for the travellers crossing the Zojila tunnel."

He assured formation of committees under LG Leh and LG J&K with respective Chief Secretaries and officers of Ministry of Road Transport and Highways, National Highways and Infrastructure Development Corporation Limited (NHIDCL) to oversee tunnel work and to sort out local issues.

Gadkari informed that seven tunnel roads are under construction in the Jammu and Kashmir region.

He said, construction of the 8,450-metre-long twin-tube tunnel between Qazigund and Banihal will be completed by the coming March.

The work on 2,968-metre-long 6-single tunnels road between Ramban and Banihal is due for completion in December 2021.

Further, the 450-metre-long tunnel between Khilani and Kishtwar will be ready by June 2022.

The Minister further informed that DPRs (detailed project reports) have been completed for the 4.5-km-long Chenani-Anantnag tunnel, the 10.2-km-long tunnel at Sinthan Pass at a cost of Rs 4,600 crore, the Rs 350-crore Khakhlani Byepass tunnel, and the 10-km-long tunnel between Chhatru and Anantnag at a cost of Rs 5,400 crore and tenders for these will be out shortly.

Gadkari also referred to the construction of Delhi-Katra Green Expressway at a cost of Rs 21,000 crore, which will reduce the distance between the two important places to only 650 km.

He informed that land acquisition is underway for the same, and the work will begin on this stretch by the coming December.

He said it is being developed as a modern highway in line with London design of transportation with weather information available to drivers.

The minister said Udhampur to Ramban highway will be completed by December.

Union Minister Jitendra Singh said the central government has made several schemes for the development of the region.

The Zojila tunnel project was re-awarded this year to Megha Engineering & Infrastructure Ltd (MEIL) which had emerged as the lowest bidder quoting Rs 4,509.5 crore. The other two bidders in the race were Larsen & Toubro and Ircon International JV.

In February this year, Gadkari reviewed this project in order to reduce the cost.

"The construction cost of Zojila tunnel was earlier worked out at Rs 6,575.85 crore... the total integrated cost of the project including Zojila tunnel and approaches up to Z- Morh tunnel works out to Rs 10,643 crores," MoRTH said.

Compared to the present cost of the integrated project, based on the tender received at Rs 4,509.5 crore, the total capital cost of the project would be Rs 6,808.63 crore, it added.