Bharatiya Janata Party president Nitin Gadkari escaped unhurt on Tuesday when the stage he was sitting on collapsed during an election rally in Uttar Pradesh.

The incident occurred on Tuesday evening when the dais where Gadkari was seated along with others gave in due to "excessive load" while he was being welcomed by some party leaders during an election meet at Raghuvarganj area, police said. The area fell under Mohamadabad assembly segment of Ghazipur district.

No one was injured in the mishap, police said.

Jayaprada was moving towards the dais to address an election meeting in Sakhopar village along with Amar Singh when she accidently slipped.

She later rose, smiled, and proceeded towards the dais to address the meeting.

The cine star had last year, while participating in the Purvanchal swabhiman rally of Amar Singh, had injured her arm while closing the door of a car. 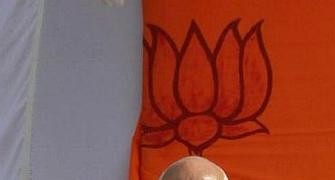 What did Rahul do to stop the 'elephant': BJP

UP: BJP leaders jump in campaign without Modi

Violence flares up in Ghazipur again