Democratic presidential hopeful Tulsi Gabbard, the first Hindu lawmaker in the United States Congress, has filed a defamation lawsuit against former US Secretary of State Hillary Clinton seeking $50 million (Rs 355 crore) in damages, alleging that she tarnished her reputation by suggesting her to be a "Russian asset" and "favourite of the Russians" in the 2020 White House race. 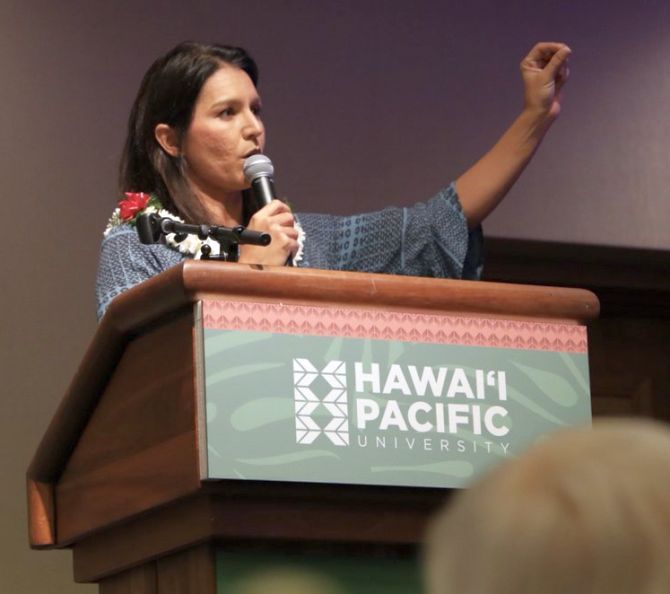 The lawsuit, filed in the Southern District of New York on Wednesday, has also claimed that Hawaii Democrat Gabbard suffered an economic loss to be proven at trial.

"Hillary calling me a 'Russian asset' is not only intended to smear my reputation and derail my campaign for president, it's also intended to silence any voice that dares to speak out against the establishment status quo," Gabbard, 38, said in an email to her supporters explaining the reason for her suing the Democratic nominee in the 2016 presidential elections.

Tulsi has been harmed by Clinton's lies and American democracy has suffered as well, according to the lawsuit.

"With this action, Tulsi seeks to hold Clinton and the political elites... accountable for distorting the truth in the middle of a critical presidential election," said the lawsuit.

Clinton, 72, who unsuccessfully fought the 2016 presidential election against Donald Trump, in an interview in October last year said that the Republican party was "grooming" a Democratic presidential candidate to run as a third-party candidate. Although she did not name Gabbard, her comments were seen directed to the Hawaii lawmaker.

According to the lawsuit, "millions of Americans heard (or read about) Clinton's defamatory statements. Scientifically conducted opinion surveys have shown that Clinton's false, malicious statements about Tulsi, including that Tulsi is a 'Russian asset' and 'the favourite of the Russians' were accepted as true by millions of Americans, including large numbers of voters in battleground presidential primary states.

The lawsuit alleges that as a direct and proximate result of Clinton's intentional and malicious misconduct, Gabbard has suffered anguish and damage to her reputation, with direct and substantial injury to her positions as United States Congresswoman; Presidential candidate; and officer in the Army National Guard.

"These substantial injuries are continuing in nature and will continued to be suffered in the future, unless and until they are remediated by this court," it said.

"One would expect someone of Mrs Clinton's political background to act with a greater level of maturity and dignity, but her personal hostility toward Representative Gabbard apparently clouded Mrs Clinton's reason and blinded her to the US," said Gabbard's legal counsel Brian Dunne.

"She resorted to a damaging whisper campaign founded on lies, and when presented with the opportunity to retract her damaging remarks, she refused. Rep. Gabbard must defend her good name and hold Mrs Clinton responsible. This lawsuit intends to do just that," he said.

But given the US laws, it would be very tough for Gabbard in the defamation case against Clinton.

"To prevail in her defamation claim, Representative Gabbard has to prove that Secretary Clinton made a false statement of fact. The Supreme Court has repeatedly held that mere 'loose and figurative' expressions, even 'vigorous epithets', don't qualify. And, the courts are especially protective of the right to engage in sharp-elbowed political debate," Jeffrey J Pyle, a Boston-based attorney, told ABC News.

"Representative Gabbard will have a difficult time convincing the court that Secretary Clinton's statements were anything other than non-factual 'rhetorical hyperbole' which is thoroughly protected by the First Amendment," said Pyle, who has represented a number of cases involving defamation, libel and First Amendment.