President Ram Nath Kovind on Wednesday delivered his Independence Day address to the nation, in which he expressed confidence that the people of Jammu and Kashmir will 'immensely benefit' from the revocation of provisions of Article 370 that gave special status to the state and its bifurcation into two Union Territories.

President Kovind also said the changes made in Jammu and Kashmir and Ladakh recently will enable the people to access and enjoy the same rights, same privileges and same facilities as their fellow citizens in the rest of the country.

Here's the full text of President's address with a word cloud. 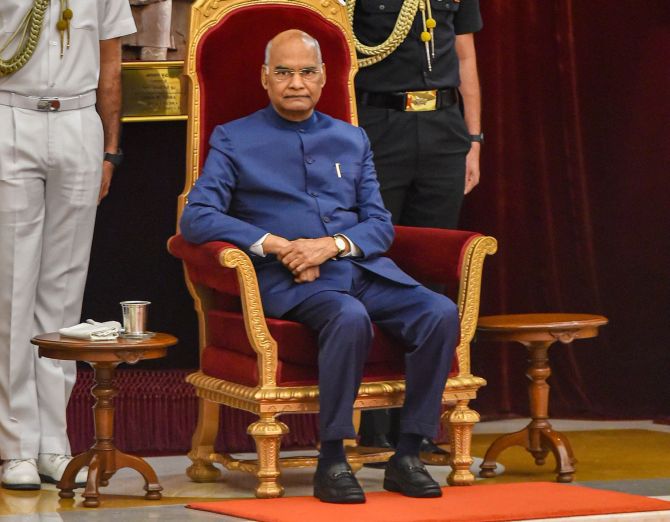 I offer you my greetings on the eve of our 73rd Independence Day. This is a happy and emotional day for all children of Mother India, whether living at home or abroad. We remember with gratitude the countless freedom fighters and revolutionaries who struggled, strived and made heroic sacrifices to win us our freedom from colonial rule.

We complete 72 years as a free nation at a very special juncture. In a few weeks from now, on October 2nd, we will celebrate the 150th birth anniversary of the Father of our Nation, Mahatma Gandhi, the guiding light of our successful effort to liberate our nation and of our continuing effort to reform our society of all inequities.

Contemporary India is very different from the India in which Mahatma Gandhi lived and worked. Even so, Gandhiji remains extremely relevant. In his advocacy of sustainability, ecological sensitivity and living in harmony with nature, he anticipated pressing challenges of our times.

When we design and deliver welfare programmes for our disadvantaged fellow citizens and families, when we seek to harness the power of the sun as renewable energy, we put Gandhian philosophy into action.

This year also marks the 550th birth anniversary of one of the greatest, wisest and most influential Indians of all time – Guru Nanak Devji. He was the founder of Sikhism, but the reverence and respect he commands go far beyond just our Sikh brothers and sisters. They extend to millions of others in India and across the world. My best wishes to them on this pious occasion.

The illustrious generation that led us to freedom did not perceive independence only in terms of transfer of political power. They considered it a stepping stone in a longer and larger process of nation building and national welding. Their objective was to improve the life of each individual, each family and of society as a whole.

In this backdrop, I am confident that the recent changes made in Jammu-Kashmir and Ladakh would be of immense benefit to those regions. They will enable the people to access and enjoy the same rights, same privileges and same facilities as their fellow citizens in the rest of the country. 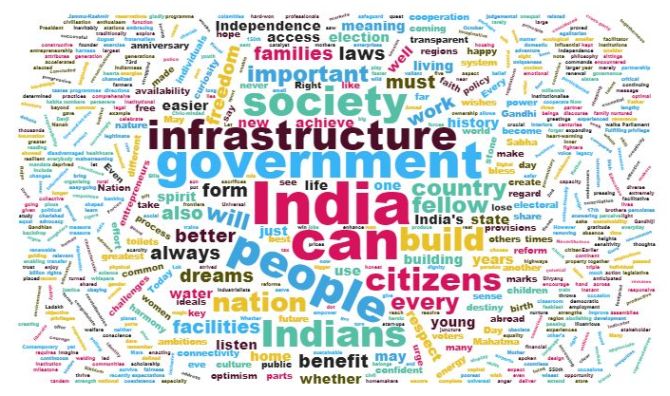 These include progressive, egalitarian laws and provisions related to the Right to Education; accessing public information through the Right to Information; reservations in education and employment and other facilities for traditionally deprived communities; and justice for our daughters by abolishing unequal practices such as instant triple talaq.

Earlier this summer, the people of India participated in the 17th general election, the largest democratic exercise in human history. For this I must congratulate our voters. They turned up at polling stations in large numbers and with much enthusiasm.

In this regard, I am happy to note that the recently concluded session of Parliament saw lengthy and productive sittings of both the Lok Sabha and the Rajya Sabha. Many important Bills were passed, in a spirit of cross-party cooperation and constructive debate. I am confident this is only an indicator of what the coming five years have in store. I also urge that this culture percolates to all our legislative assemblies.

Why is this important? It is important not merely because the elected must be equal to the trust placed in them by their electors. It is also important because nation building -- a continuous process, of which Independence was a key milestone -- requires every institution and every stakeholder to work in tandem, to work in harmony and to work in togetherness.

Nation building, at the end of the day, is about creating that optimal partnership between voters and their representatives, between citizens and their government, and between civil society and state.

The state and the government have an important role here, as a facilitator and an enabler. As such, it is critical for our key institutions and the policy makers to study and appreciate the message being sent by citizens and to be responsive to the thoughts and wishes of our people.

As the President of India, it is my privilege to travel all over our country, to our diverse states and regions, and meet fellow Indians from all walks of life. Indians can be very different in their tastes and habits, but Indians share the same dreams.

Before 1947, the dreams were for a free India. Today, the dreams are for accelerated development; for effective and transparent governance; and yet for a smaller footprint of government in our everyday lives.

Fulfilling these dreams is essential. Any reading of the mandate of the people would make their aspirations clear. And while the government inevitably has its part to play, I would argue that the greater opportunity and ability lies in the skill, talent, innovation, creativity and entrepreneurship of 1.3 billion Indians.

These attributes are not new.

They have kept India going and have nurtured our civilisation for thousands of years. There have been times in our long history when our people encountered hardships and challenges.

Even on such occasions, our society proved to be resilient; common families showed uncommon courage; and so many determined individuals found the strength to survive and to thrive. Today, given a facilitative and enabling environment by the government, we can only imagine what our people can achieve.

The government can build financial infrastructure in the form of a transparent, inclusive banking system, an online-friendly tax system and easier access to capital for legitimate entrepreneurs.

The government can build connectivity infrastructure in the form of wider, better highways and safer, faster trains; airports in the interiors of our country, and ports that dot our coasts. And near universal data access that allows common citizens to benefit from Digital India.

The government can build social infrastructure in the form of a comprehensive healthcare programme, and facilities and provisions for the mainstreaming of our Divyang fellow citizens. The government can build legal infrastructure by enacting laws that advance gender equality, as well as by removing obsolete laws to make life easier for our people.

For example, rural roads and better connectivity have meaning only if farmers use them to reach bigger markets and get better prices for their produce. Fiscal reforms and easier regulations for business have meaning only if our entrepreneurs, whether small start-ups or big industrialists, use these to build honest and imaginative enterprises and create sustainable jobs.

Universal availability of toilets and household water have meaning only if they empower the women of India, enhance their dignity and become a catalyst for them to go out into the world and achieve their ambitions. They can achieve their ambitions as they choose: as mothers and homemakers – and as professionals and individuals with their own destiny.

And when they do so, they display the same spirit and resolve as the valiant men and women who serve in our Armed Forces and paramilitary and police forces.

Whether you guard our nation at the frontiers or check that hand before it throws a stone at a passing train or any other public property -- just like that, for the sake of it; or perhaps in anger -- in some measure you protect a shared treasure. This is not just a matter of obeying laws; it is of answering to an inner conscience.

I have spoken so far of how state and society, government and citizen, must see each other and must cooperate with each other. I would like to turn to how we Indians should see one another -- how we should have the same expectations from and regard for fellow citizens as we would expect them to have from and for us.

Through the millennia and through the centuries, India has rarely been a judgemental society. Rather, it has had an easy-going, live-and-let-live organising principle. We respect each other's identity -- whether born of region, language or faith; or even the absence of faith. India's history and destiny, India's legacy and future, are a function of coexistence and conciliation, of reform and reconciliation -- of expanding our hearts and embracing the ideas of others.

This spirit of cooperation is what we bring to our diplomatic endeavours as well, as we gladly share our experiences and our strengths with partner countries in every continent. At home and abroad, in domestic discourse and in foreign policy, let us always be conscious of the magic and uniqueness of India.

We are a young country, a society increasingly defined and shaped by our youth. The energies of our young are being channelized in so many directions -- in a quest for excellence from sport to science, from scholarship to soft skills.

This is heart-warming. Nevertheless, the greatest gift we can give our young and our coming generations is to encourage and institutionalise a culture of curiosity -- especially in the classroom. Let us listen to our children -- for through them the future whispers to us.

We Indians are a people who dare to explore the moon and Mars. We are also a people who persevere to create a loving habitat for three of every four wild tigers on our planet, because it is characteristic of Indianness to empathise with nature and with all living beings.

Over a hundred years ago, the inspirational poet Subramania Bharati gave voice to our freedom movement and its expansive goals in the following lines in Tamil: [I QUOTE]

This can be interpreted as: [I QUOTE]

We will learn both scripture and science

We will explore both heavens and oceans

We will unravel the mysteries of the moon

And we will sweep our streets clean too [UNQUOTE]

With that, I once more wish you and your families all the very best on the eve of Independence Day. 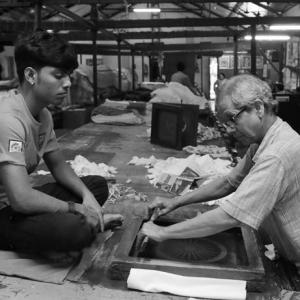