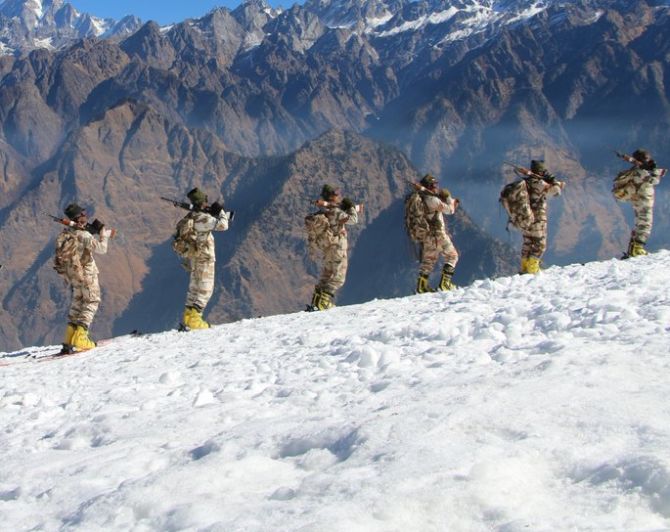 Eight months after the Doklam standoff, the government has extended the ambit of an "exclusive" pension scheme to cover the armed forces personnel killed or injured while guarding the Sino-India border, seen as reflection of its renewed focus on the northern frontier.

However, the government rejected the army's demand to implement the scheme with retrospective effect from June last year, when the Doklam face-off between Indian and Chinese armies had begun, official sources said.

Earlier, the scheme was applicable to those security personnel deployed along the Line of Control and International Border with Pakistan.

According to a defence ministry notification, the family pension scheme for the armed forces personnel deployed along the Sino-India border came into effect from March 7.

It said the cases which were settled prior to the issue of the notification will not be "reopened".

Defence Minister Nirmala Sitharaman on December 20 had accorded in-principle approval to extend the liberalised family pension to those guarding the nearly 4,000-km-long Line of Control with China.

"Bringing the armed forces deployed along the Sino-India border under the scheme reflects government's serious approach towards the northern frontier," said a senior official.

In January, Army Chief Gen. Bipin Rawat had said the time had come for India to shift its focus from borders with Pakistan to the frontier with China, indicating that situation along it was worrying.

The sources said the army was pressing for implementing the exclusive scheme at least from June last year, when the Doklam standoff between Indian and Chinese armies had begun.

They said the army was likely take up the matter with the defence ministry as it feels implementing the scheme with retrospective effect from middle of last year will benefit a sizeable number of army men.

Troops of India and China were locked in a 73-day-long standoff in Doklam from June 16, 2017, after the Indian side stopped the building of a road in the disputed area by the Chinese Army.

The face-off ended on August 28.

The sources said since 2011, the defence forces had been demanding inclusion of those deployed along the Sino-India border under the pension scheme.

They said the families of those killed while patrolling the border with China between 2011 and Mar 6 this year will have to take legal recourse in seeking justice.

The sources said the Armed Forces Tribunal had also issued notices to the government on matter.

Under the scheme, an armed forces personnel getting injured or killed due to natural calamities, fire or while performing operational duties against enemy forces will get family pension.

The notification said 'Liberalised Family Pension' covers accidental death or injury sustained due to natural calamities such as flood, avalanches, landslides, cyclone, fire and lightening or drowning in river while performing operational duties or movements in action against enemy forces and armed hostilities in operational area.

It said an amendment was made to the order dated February 3, 2011, relating to the scheme.

Source: PTI© Copyright 2020 PTI. All rights reserved. Republication or redistribution of PTI content, including by framing or similar means, is expressly prohibited without the prior written consent.
Related News: Doklam, Line of Control and International Border, Chinese Army, China, Sino-India
SHARE THIS STORY
Print this article