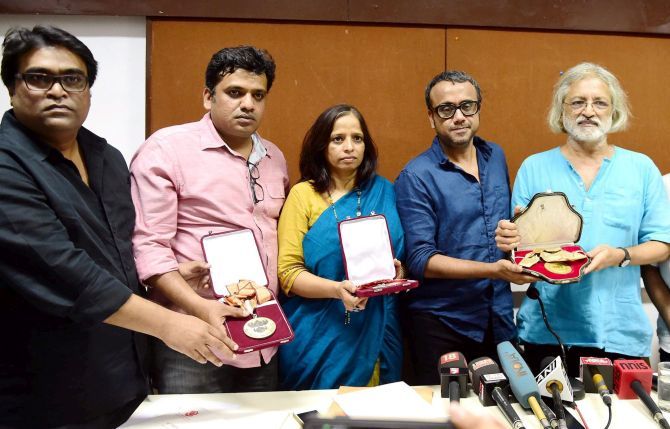 Unable to force the government to scrap the appointment of Gajendra Chauhan as Film and Television Institute of India chairman, agitating students today unilaterally withdrew their 139-day-old strike but vowed to continue protests as 10 eminent filmmakers returned their National Awards voicing solidarity with them and against growing intolerance in the country.

“We are calling off the strike as a collective decision in the best interests of the students and returning to academics with immediate effect. But our protest will continue. We will take the battle forward,” FTII Students Association representative Vikas Urs said in Pune.

As the lingering impasse at the Film and Television Institute of India ended, 10 frontline filmmakers including Dibakar Banerjee and Anand Patwardhan announced in Mumbai their decision to return the prestigious National Awards over the government’s “apathy” in addressing the students issues and the environment of intolerance.

“As filmmakers we stand with the students of FTII and are determined to not let them shoulder the entire burden of the protest,” they said in a letter to President Pranab Mukherjee and Prime Minister Narendra Modi.

“We feel compelled to return the honour the state has bestowed on us. Condoling deaths without interrogating the forces that scripted those murder revealed a tacit acceptance of the ugly force distorting our country,” they said.

The unilateral announcement by FTII students came after repeated talks between the agitating students and the information & broadcasting ministry representatives failed to break the logjam, with both sides refusing to budge from their conflicting position on the issue of removal of Chauhan, best known for his role of Yudhishthir in teleserial Mahabharat.

Urs declared though the students have decided to call off the strike, there will not be any “proactive engagement” with the I&B ministry.

Reflecting the continuing unease on the campus despite withdrawal of the stir, Urs said, “Now, it goes beyond the five appointments (of Chauhan and four FTII society members) which we had questioned.”

“The right wing attitude is exposed and we know who is running the country,” he said, apparently targeting Bharatiya Janata Party’s ideological mentor Rashtriya Swayamsevak Sangh.

“Our protest has been peaceful so far and it will continue like that. He (Chauhan) is not acceptable to us,” another FSA respresentative Rakesh Shukla said when asked how will the students react to Chauhan, a long-time BJP member, taking charge, indicating it may take some time before normalcy returns to the campus.

Soon after the announcement, Union minister of State for Information & Broadcasting Rajyavardhan Rathore welcomed the step and said the ministry will continue to engage with the students on improving the conditions at the institute.

“I am glad that they are returning back to their classes. The discussions on how to improve this institute will continue,” Rathore said in Delhi, reaffirming the government’s commitment to making FTII an institution of national importance.

“I am not here out of anger, outrage. Those emotions have long been exhausted. I am here to draw attention. Returning my very first National Award which I received for ‘Khosla Ka Ghosla’ is not easy. It was my first film and for many my most loved,” Banerjee told a press conference here.

“If there is intolerance of debate, of questioning and usually intolerance of a student body wanting to have a better teaching environment and that intolerance manifests in apathy, then that is what we are protesting against,” he said.

“I haven’t seen so many incidents happen at the same time. This is a sign of what is beginning to happen and I think that is why people are responding all over the country in different ways,” he said, referring to the instances of writers and artists returning their honour against “growing intolerance” in the society and “suppression of right to dissent”.

“We are focusing on the FTII. This is a struggle that we are supporting from the beginning,” Patwardhan said .

Banerjee said, “Through my humble return of the award, knowing fully well that I and we will be ridiculed and probably insulted and criticised for our actions, I aim to speak for all Indians who want our classrooms to become true source of learning and not mediocrity.”