West Bengal chief minister Mamata Banerjee on Friday refused to attend a meeting of Niti Aayog to be chaired by Prime Minister Narendra Modi on June 15, saying it is "fruitless" as the body has no financial powers to support state plans. 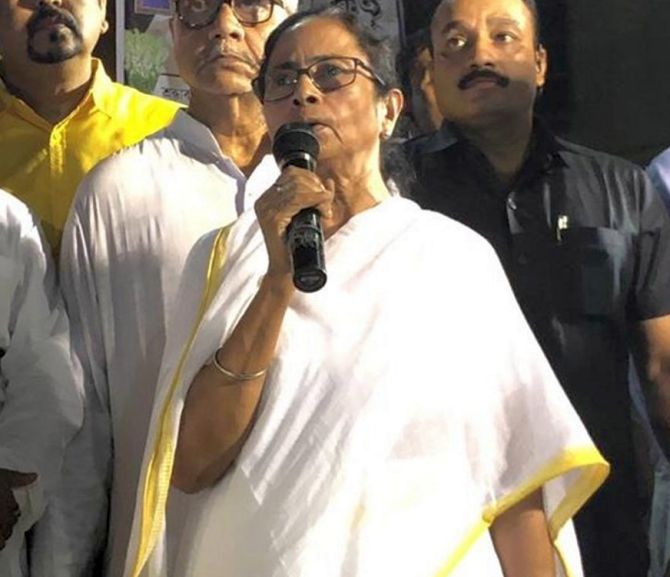 Her decision to skip the meeting of the top plan panel comes days after she stayed away from the swearing-in ceremony of Prime Minister Narendra Modi on May 30 citing as "untrue" claims by the Bharatiya Janata Party that 54 of the party workers were murdered in political violence in Bengal.

She conveyed her decision not to attend the Niti Aayog meeting in a letter written to the prime minister.

"Given the fact that the Niti Aayog has no financial powers and the power to support state plans it is fruitless for me to attend the meeting of a body that is bereft of any financial powers," Banerjee wrote.

She also suggested that focus should be shifted to the Inter-State Council to deepen cooperative federalism and strengthen federal polity.

"The experience of last four-and-half years we had with Niti Aayog brings me back to my earlier suggestion to you that we focus on Inter-State Council constituted under Article 263 of Constitution, with appropriate modifications to enable ISC to discharge its augmented range of functions as the nodal entity of the country," she said.

"This will deepen cooperative federalism and strengthen federal polity. May I also reiterate that the National Development Council, which has been given a quiet burial, may also be subsumed within the broadened constitutional body of the Inter-State Council," the chief minister said.

Modi is set to chair the fifth meeting of the Niti Aayog's Governing Council on June 15 to discuss various issues regarding the country's development.

Banerjee, however, didn't clarify whether any other minister of her cabinet would attend the meeting on her behalf or not.

Earlier too, Banerjee had skipped meetings of the policy think-tank, expressing displeasure over the dissolution of the Planning Commission and creation of a new structure.

She had sent West Bengal Finance Minister Amit Mitra to represent the state at the meeting last year.

In her letter, Banerjee said the formation of Niti Aayog was unilaterally announced without any discussion with chief ministers.

She cited examples of statements made by Niti Aayog officials and a former Union minister stressing the need to give the think-tank the power to allocate funds, as part of the efforts to address regional imbalances.

The TMC supremo's decision to give Niti Aayog meeting a miss comes amid heightened political tussle between the TMC and the BJP in West Bengal.

Buoyed by the BJP's victory in 18 of the 42 Lok Sabha seats in Bengal in the recently-concluded elections, only four less than TMC's 22, the saffron party's leaders have been asserting that they would overthrow the Trinamool Congress government in the 2021 assembly polls.

Her decision of not attending the NITI Ayog meeting drew sharp reactions from the BJP, which accused Banerjee of not being serious about development of the state.

"Her decision only reflects that she is yet to accept her defeat and want to politicise everything. While doing so, she is affecting the development of the state. She should be ashamed of it. Only she has problem with NITI Aayog, other chief ministers don't have any problem," state BJP president Dilip Ghosh said.

"The entire country is moving forward under the leadership of Prime Minister Modi. Even chief ministers of states ruled by Congress are also attending the NITI Aayog meeting. Only Mamata Banerjee is opposing it. This is against the interest of the nation. She is trying to scuttle the growth of the nation and is behaving like a "anti-national," West Bengal BJP vice president Jay Prakash Majumdar said.

The Trinamool Congress was quick to hit back at the BJP saying neither Banerjee nor the TMC needs lessons on nationalism.

"What is use of attending a meeting which doesn't bear any result? The BJP can't force us to attend the meet, it is the prerogative of the chief minister to decide. And neither TMC nor Mamata Banerjee needs lessons on nationalism or development from a communal party like BJP," state Food Supplies Minister Jyotipriyo Mullick said.