The Supreme Court is all set to live-stream its Constitution bench proceedings from Tuesday, and the hearing of pleas challenging reservations for the economically weaker sections and the row over control of services between the Centre and the Delhi government will be the first regular webcast. 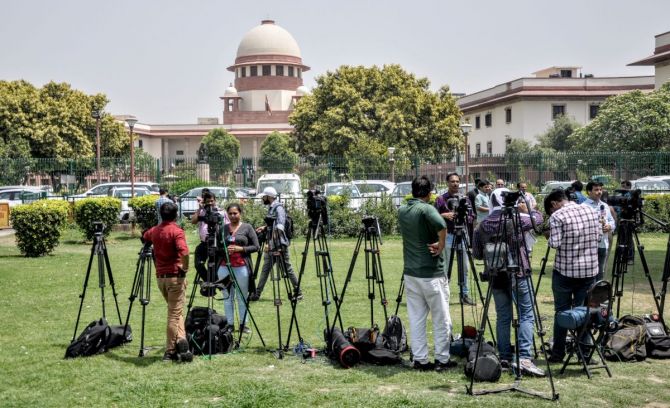 Exactly four years ago, on September 27, 2018, the then Chief Justice of India Dipak Misra, heading a bench had delivered the landmark judgment on live telecast or webcast of important proceedings in matters of constitutional importance, saying ”Sunlight is the best disinfectant”.

Earlier in the day, a  bench headed by Chief Justice Uday Umesh Lalit said the top court will soon have its own ”platform” to live-stream its proceedings instead of having to use YouTube.

The bench said this when former BJP leader K N Govindacharya's counsel argued that the copyright of apex court's proceedings cannot be surrendered to private platforms.

”YouTube has clearly sought the copyright over the webcast,” lawyer Virag Gupta told the bench that also comprised Justices S Ravindra Bhat and J B Pardiwala.

”These are the initial stages. We will certainly have our own platforms...We will take care of that (copyright issue),” the CJI said and listed Govindacharya's interim plea for hearing on October 17.

Referring to a 2018 judgment, the lawyer said it was held that ”the copyright over all the material recorded and broadcast in this court shall vest with this court only”.

He also referred to the terms of use of YouTube and said this private platform also gets the copyright.

In a unanimous decision taken at a recent full court meeting headed by the CJI, the apex court decided to live-stream proceedings of all Constitution bench hearings from September 27, four years after the path-breaking announcement by Justice Misra in 2018.