Opposition parties on Friday launched a scathing attack against the government for its move to authorise 10 Central agencies to intercept any information on computers, describing it as ‘unconstitutional and an assault on fundamental rights’ and demanded its immediate withdrawal. All India Majlis-e-Ittehadul Muslimeen chief Asaduddin Owaisi claimed that this is what the government meant when they said 'ghar ghar Modi'.

The Opposition also raised the issue in both houses of Parliament and created uproar that led to adjournment in the Upper House.

Defending the order, the government said the authorisation was given under 2009 rules and that the opposition was playing with the national security by ‘making a mountain where even a molehill doesn't exist’.

On its part, the Bharatiya Janata Party said it is legal with adequate safeguards and dubbed the opposition's criticism as a ‘text book case’ of speaking without any homework.

The Congress along with the Communist Party of India-Marxist, the Samajwadi Party, the Rashtriya Janata Dal, the Trinamool Congress, Aam Aadmi Party and National Conference said they will collectively oppose the order.

Hitting out at Prime Minister Narendra Modi over the move, Congress chief Rahul Gandhi saying converting India into a police state won't solve his problems but only proves he is an ‘insecure dictator’.

‘Converting India into a police state is not going to solve your problems, Modi Ji. It's only going to prove to over 1 billion Indians, what an insecure dictator you really are,’ Gandhi said on Twitter.

‘From Modi Sarkar to stalker sarkar, clearly the string of losses has left the BJP government desperate for information,’ the official Twitter handle of the Congress said.

Congress leader Jaiveer Shergill accused the government of ‘data snooping, stealing and scaring’ Indians and demanded its immediate withdrawal that gave unbriddled powers to the government.

‘Modi has used a simple Government Order to permit our national agencies to snoop on our communications. Who knew that this is what they meant when they said ‘ghar ghar Modi'. George Orwell's Big Brother is here & welcome to 1984,’ Owaisi tweeted.

Big Brother is a fictional character and symbol in George Orwell's novel Nineteen Eighty-Four.
‘Blanket surveillance is bad in law,’ Trinamool Congress chief Mamata Banerjee said on Twitter and demanded that the notification be withdrawn immediately.

The Centre, however, said the rules for intercepting and monitoring computer data were framed in 2009 when Congress-led United Progressive Alliance was in power and its new order only notified the designated authority.

Former Union minister and senior Congress leader Anand Sharma, flanked by leaders of other opposition parties, said, "It is the ultimate assault on fundamental rights and the right to privacy. It is also in direct conflict with the Supreme Court judgement that right to privacy is a fundamental right. The government has done it by strength we collectively oppose it."

"If anybody is going to monitor the computer, including your computer, that is the Orwellian state. George Orwell is around the corner. It is condemnable," added his colleague P Chidambaram.

"Whenever the BJP feels it is going out of power, it talks about the nation being in danger. The country is not in danger...it is because of the BJP that the nation is in danger. If they go, the danger will come to an end...," Leader of Opposition in Rajya Sabha Ghulam Nabi Azad said.

TMC member Sukhendu Sekhar Roy labelled the move ‘draconian’ and accused the government of tapping the phones of all opposition leaders.

"Now, they have legalised interception of phone calls and computers. This is a draconian move of the government," he said.

Samajwadi Party's Ram Gopal Yadav also termed the order unconstitutional and said the present government should refrain from making such moves with just a few months left for the general elections.

‘Why is every Indian being treated like a criminal? This order by a govt wanting to snoop on every citizen is unconstitutional and in breach of the telephone tapping guidelines, the Privacy Judgement and the Aadhaar judgement (sic),’ he said.

Former Jammu and Kashmir chief minister Omar Abdullah hoped the Supreme Court will take a ‘long hard look’ at the legality of the Centre's order which allows government agencies to intercept ‘any information’ contained in any computer system.

RJD's Manoj Jha said it was a cause of concern for not just parliamentarians, but for every Indian.

"We are perpetually living in a Orwellian state," he said. 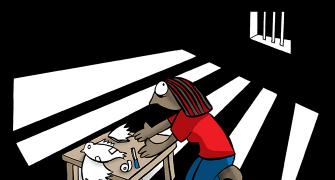 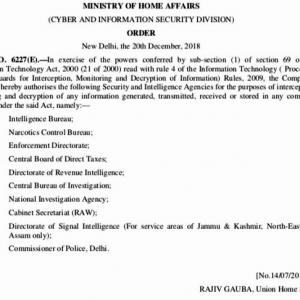