Four security forces personnel, including an Army officer, and three terrorists were killed during a failed infiltration bid by the ultras along the Line of Control (LoC) in Jammu and Kashmir's Machil sector on Sunday, officials said. 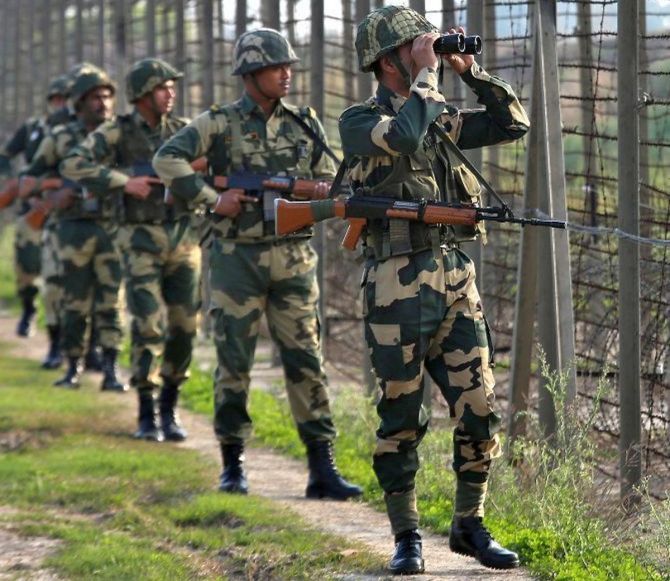 The terrorists made an abortive bid during the night to infiltrate into the Indian side of the LoC in Machil sector in north Kashmir's Kupwara district, they added.

The infiltrators were challenged and three of them were killed, the officials said.

However, three Army soldiers, including an officer, and a Border Security Force (BSF) jawan were also killed during the operation, they added.

Meanwhile, Srinagar-based defence spokesperson Colonel Rajesh Kalia said at about 1 am, a BSF patrol noticed suspicious movement near the Anti-Infiltration Obstacle System (LoC fence), about 3.5 km from the LoC.

The BSF personnel challenged the infiltrators and a gunbattle ensued, in which a terrorist was killed, he said.

'A BSF soldier was killed in action (KIA) and the firefight stopped at 0400 hours,' Col Kalia said in a statement.

He said more troops were rushed to the area and the movement of the militants was tracked with the help of surveillance devices.

'Contact was re-established at 1020 hours when heavy fire was drawn by own search parties approximately 1.5 km from the LoC. In the ensuing firefight, two more terrorists were killed. Own troops suffered three KIA and two injured,' Col Kalia said.

He added that the injured soldiers have been evacuated.

The operation is in progress and further details are awaited, the spokesperson said.