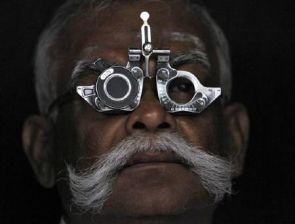 At least four persons lost their eyesight and the vision of 19 others was critically affected after alleged botched-up surgeries by the doctors at a cataract check-up camp in Maharashtra’s Washim district, a senior health official said on Thursday.

Media reports, however, put the number of people losing their eyesight at 14, although the figure was not officially confirmed.

Washim's civil surgeon and the doctor who performed the surgeries have been suspended in view of the botch-up while suspension of a doctor at Akola Medical College has also been recommended, the state health department official said.

"On October 31, we got reports of surgery botch-up at the Washim cataract check-up camp and subsequent negligence at the Akola Medical College," he said. "The health department officials immediately swung into action and shifted 22 patients from Washim and Akola to Mumbai’s J J Hospital, where all efforts are being made to restore their eyesight under the supervision of world-class ophthalmologists,” he said.

"Following reports and finding serious negligence on the part of doctors at Washim Hospital and Akola Medical College, the state health minister has ordered the suspension of Washim civil surgeon Surekha Mende and Dr P P Chauhan, who performed surgeries on nearly 14 patients at the eye cataract check-up camp," the official said.

Noted eye surgeon at Mumbai's J J Hospital, Dr T P Lahane, said, “We are doing every bit to treat the patients in order to restore their eyesight."

"They have severe 'pseudomonas' infection in the eyes. We have operated 21 patients out of whom 14 were severely infected. The rest have minor to serious infection. We have managed to restore the eyesight of four patients, while another four lost their vision completely. As of now there are 19 patients admitted with their eyes in critical condition and we are trying our best to treat them," Dr Lahane said.

The victims had gone for cataract surgery in a Washim camp between October 6 and 29. However, from October 13, a few patients started coming back to the hospital with complaints of watery, itchy and red eyes and blurred vision. "When these patients started turning up at Washim hospital, the doctors, without analysing the cause, referred them to the medical college at Akola, where also they did not get proper attention for over 10 days, which shows serious and criminal negligence," the health official said.

Dr Lahane said the situation would not have been so grim had the patients been brought to J J Hospital in the earlier stages of complications.