Surplus rain water gushed out of reservoirs while several roads in Chennai resembled swollen rivers and four persons were killed in rain related incidents in Tamil Nadu and over 60 houses suffered damage, authorities in Chennai said on Monday. 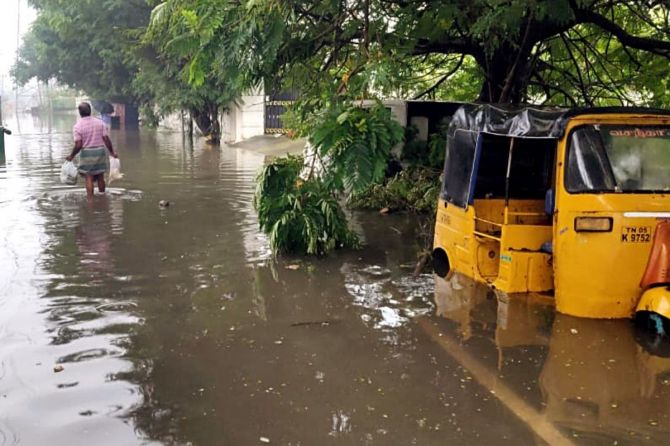 The Poondi, Cholavaram, Puzhal, Chembarmbakkam and Thervai Kandigai reservoirs in the state capital and Veeranam lake, about 230 kilometres from Chennai released surplus water, which was cumulatively a little over 10,000 cusecs of water, as showers continued in catchment areas.

Vellore district authorities said the discharge from Ponnai Anaicut was increased to about 6,364 cusecs by evening. In view of release of surplus water from reservoirs, an alert was sounded to people in their respective regions.

In Chennai, most roads and bylanes were covered under sheets of water while there was water upto two feet in low lying localities. Power supply has also been disconnected for several neighbourhoods considering safety.

A flooded city police station, Adambakkam had to be shifted to a temporary building. At least 75 trees got uprooted here and these were cleared by civic personnel.

Monsoon rains picked pace for a while and receded for some time, playing hide and seek through the day, in Chennai and in several other regions including the northern districts.

A section of subways here and in suburbs continued to be closed and traffic diversions too were on, giving road-users a harrowing time even as civic workers slogged to remove silt and de-clog drains.

Of the 290 water-logged areas, flood water was drained using heavy equipment in 59 localities and swift action is on to pump out flood water in the remaining 231 neighbourhoods, the government said in an official release.

Four persons lost their lives in rain related incidents in Chennai, Theni and Madurai districts 'in the past 24 hours and 16 heads of cattle died, the release added.

Of the 16 city subways that witnessed flooding, water has been drained in 14 of them and the remaining two would also be free of rainwater soon, the authorities said.

The government said 37 districts received rainfall and the state average was 14.2 millimetres (1.42 cm) for the past 24-hours.

Similarly, in northern districts of Kancheepuram, Tiruvannamalai, Chengelpet and Tiruvallur 314 people have been housed in 10 shelters and they are being provided food and all other basic amenities.

The meteorological department in a bulletin said the cyclonic circulation over south east Bay of Bengal and adjoining South Andaman Sea, extending up to 5.8 kilometres above the mean sea level, persists.

Under its influence, a low pressure area is very likely to form over southeast Bay of Bengal and neighbourhood during the next 24 hours.

It is likely to move west–northwestwards, concentrate into a depression and reach near north Tamil Nadu coast by November 11, early morning and bring widespread rainfall in several regions of the state, the bulletin said.

Considering such advisory, fishermen were advised to not venture into sea for fishing between November 9 and 12.

Revenue and Disaster Management Minister KKSSR Ramachandran said two teams of NDRF personnel have been deployed in Madurai and one team each in Chengelpet and Tiruvallur. Similarly, the state disaster response teams are stationed in Thanjavur and Cuddalore districts.

The Tamil Nadu fire and rescue services wing is on alert mode with all the necessary equipment, he said.

The 24x7 state control room here and those in districts could be contacted through the toll free numbers 1070 and 1077 respectively, the minister said.

People may also get in touch with authorities of Greater Chennai Corporation by using the 1913 toll free number.

The rainfall (from 8.30 am, Nov 7, to 8.30 am, Nov 8) recorded here and suburban areas ranged between 4 cm and 14 cm. Other regions, including Tiruvannamalai, Kancheepuram and Cuddalore, recorded between 3 cm and 1 cm showers.

As many as 200 special monsoon medical camps were held, in which 3,776 people received medical assistance. A total of 152 fever cases, 165 cases related to skin infections and over 2,600 other cases were treated, the corporation said.

"Power supply will be restored expeditiously with receding of flood waters and rains," the minister tweeted.

While transport services, including suburban train services, were affected on Sunday, Southern Railway said "all suburban services are running and will run normally."

Though state-run bus services in Chennai and in other neighbouring regions continued to ply, there was disruption in services on several routes. Metrorail services were not affected.

In view of rains, prices of vegetables shot up sharply with a kilo of tomato, which was available for about Rs 30-40, a couple of days ago now being sold at Rs 90-Rs 100. Similarly prices of other veggies also saw an increase.

Considering the showers, the Arignar Anna Zoo here said a 'monsoon monitoring team' has been constituted to ensure the safety and security of animals and to undertake immediate remedial measures, if and when warranted. 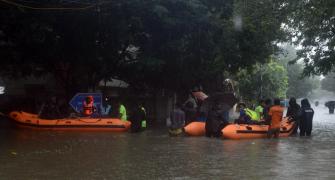 Chennai likely to get heavy showers for next 3 days 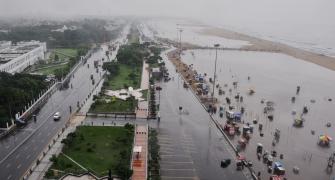 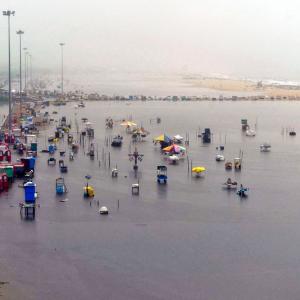 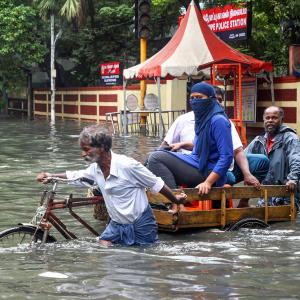