Four persons were killed and seven others suffered injuries after a single-storey house collapsed in Shivaji Nagar area of Govandi in eastern Mumbai early on Friday, a civic official said. 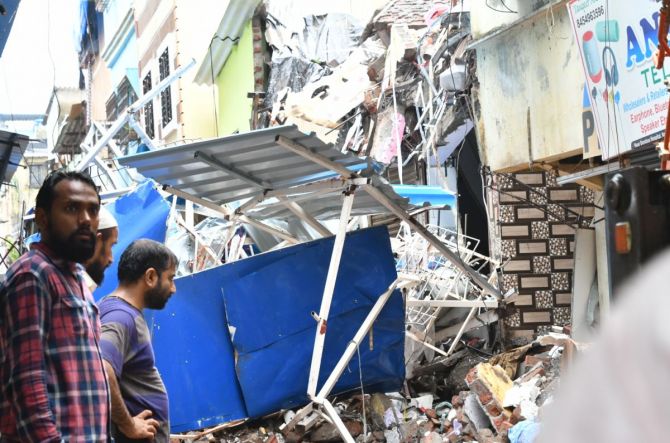 The incident occurred at plot number 3 near Bombay City Hospital around 5 am, he said.

"On being alerted about it, seven fire engines, one rescue van of the fire brigade, and personnel of the police as well as other agencies reached the spot and launched a search and rescue operation," the Brihanmumbai Municipal Corporation (BMC) official said.

So far, four persons have lost their lives in the incident and seven others were injured, he said.

After the incident, the injured were rushed to two hospitals -- Ghatkopar-based Rajawadi Hospital and Lokmanya Tilak Municipal General Hospital in Sion, the official said.

However, doctors at the Rajawadi Hospital declared two of them brought dead.

They were identified as Neha Parvez Shaikh, 5, and Mokar Zabir Shaikh, 80.

A woman, Shamshad Shaikh, 45, who was admitted to that hospital in a critical condition, died during treatment later, he added.

"Meanwhile, a 22-year-old man, identified as Farin Shaikh, was pulled out from under the rubble and was taken to Rajawadi Hospital, where doctors declared him dead before admission," the BMC official said.

A fire brigade official said that 15 people have been pulled out of the debris so far and the operation is still underway.

The injured persons are undergoing treatment and their condition is stable, he said.