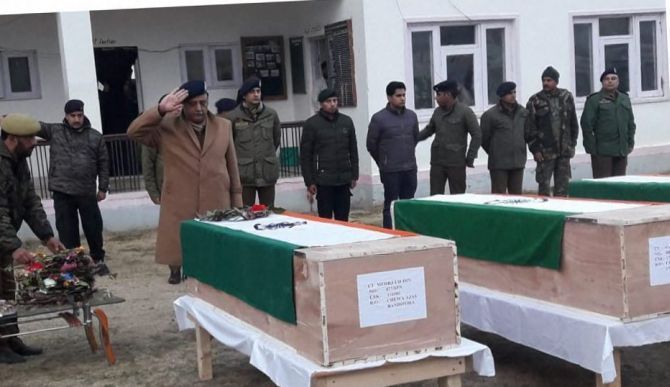 IMAGE: Wreath-laying ceremony of four policemen who were killed by terrorists in an attack, at Zainapora in Shopian of South Kashmir, on Tuesday. Photograph: PTI Photo

Four policemen, who were guarding a minority pocket in south Kashmir's Shopian district, were gunned down on Tuesday by Pakistan-based Jaish-e-Mohammed terrorists, police said.

At the time of the attack, the policemen, wearing 'pehran' (a gown worn in Kashmir during winters), were braving cold in their pre-fabricated guardroom outside the minority pocket at Zainpora area of the district.

The pocket houses six Kashmiri Pandit families, but only one family was present there at the time of the incident.

A senior police official said that six terrorists of banned outfit Jaish-e-Mohammed were led by former Special Police Officer Adil Bashir, who decamped eight weapons from a PDP legislator in October this year and deserted the police force.

Quoting eyewitnesses, the police officer said that terrorists fired indiscriminately, killing three policemen on the spot and critically injuring one.

The injured policeman was rushed to an Army hospital, where he succumbed to injuries, the official said.

They were paid floral tributes at Shopian police lines by Inspector General of Police (Kashmir range) Swayam Prakash Pani and other senior officers.

Immediately after the shoot out, the terrorists fled with three AK-series rifles and one Self Loading Rifles (SLR) of the policemen, the official said.

The official said that an intercept had been received in which it was clear that the Jaish-e-Mohammed, a banned terrorist organisation, was behind the barbaric act.

Jammu and Kashmir Governor Satya Pal Malik expressed grief over the killing of the policemen in the terror attack.

Malik prayed for the departed souls and conveyed his sympathies to the bereaved families.

The incident drew sharp criticism from all political parties.

National Conference vice president Omar Abdullah tweeted, 'I strongly condemn the attack on the police post in Shopian and condole the deaths of three @JmuKmrPolice personnel in the line of duty.'

'Strongly condemn attack on policemen in Shopian claiming 3 precious lives. Bears repetition, violence achieves nothing but destruction. Solidarity with families of jawans. Relieved that no harm caused to any civilians in the minority pocket they guarded,' she tweeted.

Expressing shock, the Congress said, "The killings or violence has neither served any purpose nor will benefit anyone, rather such type of dastardly acts will have serious implications on the society, besides vitiating the peace."

State unit of the Bharatiya Janata Party also criticised the 'cowardly attack' and said the continued 'jihadi terror and violence' against the security personnel was part of a 'sinister design' to subvert the morale of the police force. 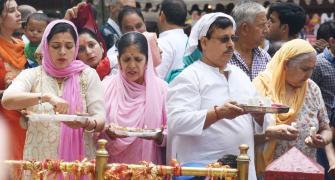 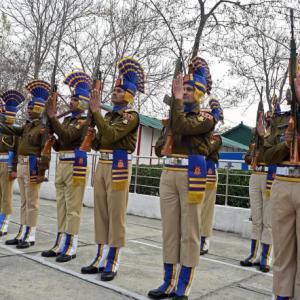 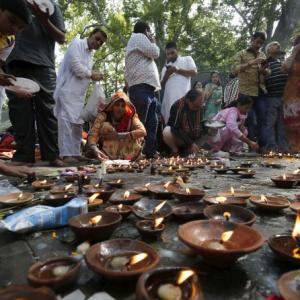