Former Union minister Sukh Ram on Monday rejoined the Congress along with his grandson Aashray Sharma ahead of the Lok Sabha polls, with the party's saying his entry would boost its poll prospects in Himachal Pradesh. 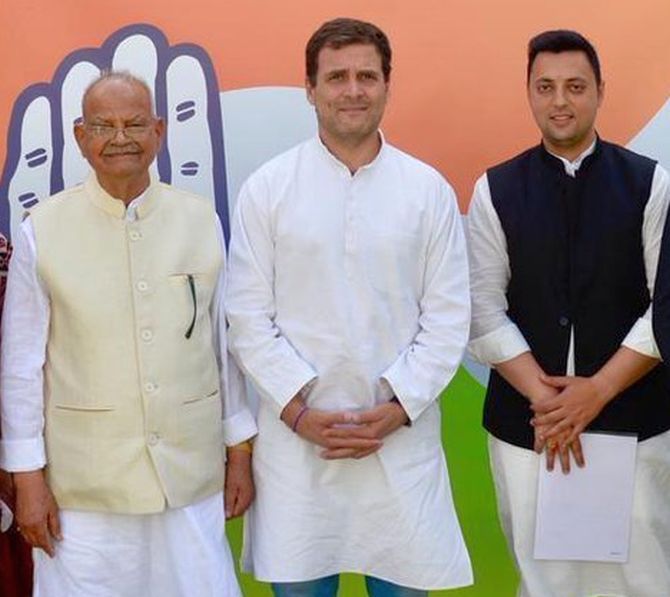 "For me, it is like homecoming," said 93-year-old Sukh Ram who returned for the second time to the Congress which he had last left ahead of the 2017 assembly elections to join the Bharatiya Janata Party.

The Congress had sacked him in 1997 following his conviction in the telecom scam which occurred when he was a Union minister in the P V Narasimha Rao government, but he returned in 2004.

The development has led to speculation on the fate of Sukh Ram's son Anil Sharma, who is a cabinet minister in the BJP-led government in Himachal Pradesh.

State BJP president Satpal Singh Satti said: "It is up to Anil Sharma whether to remain as HP minister or quit. He should make his stand clear."

Sources said Anil Sharma's son Aashray could be the party's choice for the Mandi Lok Sabha seat. Sukh Ram has represented the seat thrice in the past.

Former Virbhadra Singh and his wife Pratibha Singh have also represented the seat in the past. Pratibha had unsuccessfully contested from the constituency in 2014.

Sukh Ram met Congress president Rahul Gandhi at his residence before announcing his return to the Congress in the presence of party chief spokesperson Randeep Surjewala.

Former Himachal Pradesh chief minister Virbhadra Singh, who does not share a great equation with Sukh Ram, was conspicuous by his absence at the event.

Surjewala said Sukh Ram has returned to the Congress, as the party is in "his heart, thoughts and religion".

Attacking BJP, Surjewala said senior leaders like L K Advani and Shanta Kumar were sidelined and denied tickets by the party, but the Congress seeks the blessings of the elderly.

"He has decided to return to the Congress and support the party to make Rahul Gandhi the country's prime minister. He will use all his strength to further strengthen the party," he said.

Sukh Ram said, "For me, it is like a homecoming. I will be 93 soon, I have come back to my house. I have spent my entire political life in the Congress. I have won 13 elections from my constituency. My family has won 17 elections and this speaks for itself."

The former Union minister alleged the BJP has "ignored those who made it win elections more than a dozen times".

"With Sukh Ram ji's entry, I am sure the party will be strengthened and will benefit from his experience," state Congress in-charge Rajni Patil said.

Sukh Ram's son Anil Sharma was part of the Virbhadra Singh-led Congress government in the state from 2012-17, but joined the BJP before the last state assembly elections.