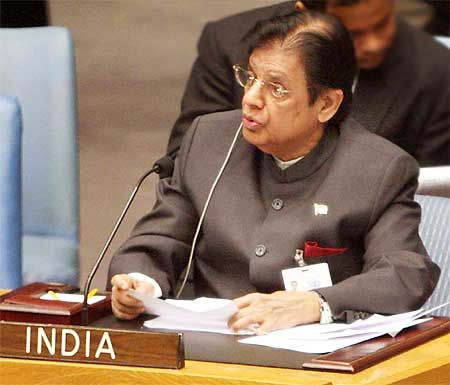 Former Union minister and Indian Union Muslim League leader E Ahamed has passed away early on Wednesday after he suffered a cardiac arrest, a senior doctor has
confirmed.

The 78-year-old Ahamed died at 2:15 am at RML hospital where he was admitted on Tuesday and put on artificial life support.

“E Ahamed has passed away at 2:15 am. His body has been taken to AIIMS hospital for embalming (a method to preserve a corpse from decaying) as the facility is not available at RML,” a senior RML doctor said.

Ahamed’s body will be taken to Kerala later on Wednesday.

The MP from Kerala’s Mallapuram suffered a cardiac arrest during the President’s address to the joint sitting of Parliament on Tuesday.

Around 2.15 pm, he was shifted to the RML trauma centre’s ICU where he was put on ventilator and breathed his last.

Prime Minister Narendra Modi condoled E Ahamed'S demise and said his efforts for empowerment of the Muslim community will be remembered.

"Saddened by the demise of Mr E Ahamed, a veteran political leader who served the nation with great diligence. My condolences," he tweeted.

He said Ahamed devoted significant efforts towards Kerala's progress and his role in deepening India's ties with West Asia was notable.

"The continuous efforts of Mr E Ahamed for the empowerment of the Muslim community will be remembered," Modi added.

"He was a committed democrat and beloved leader of Kerala, whose simple lifestyle and commitment to the cause of people was an example to an entire generation," Gandhi said.

"My thoughts & prayers are with his family & loved ones in this time of grief," he said in a tweet.

The vice-president recalled his long association with Ahamed. "He was an eminent personality. He is somebody I have known for a quarter of a century and his passing away is a great loss," said Ansari.

Many leaders from Kerala like A K Antony, Vyalar Ravi and Ramesh Chennithala also paid their respects.