The cremation will be on Sunday afternoon at the Nigambodh Ghat in New Delhi. 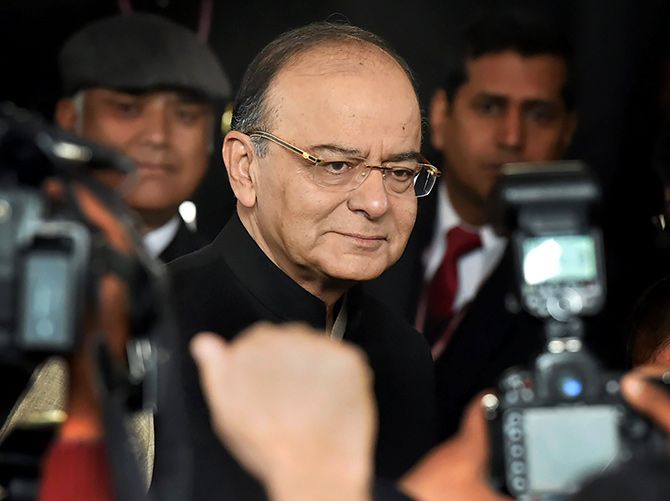 Arun Jaitley, who as finance minister ushered in India's biggest tax reforms and was the chief trouble-shooter of the Bharatiya Janata Party and the Modi government, died at the All India Institute of Medical Science in New Delhi on Saturday after battling multiple health issues for the last several months. He was 66.

In a brief statement, the hospital said Jaitley breathed his last at 12.07 pm. He was admitted to the hospital on August 9 following complaint of breathing difficulty.

The cremation will be on Sunday afternoon at the Nigambodh Ghat.

Known as a consensus builder, Jaitley was the BJP's man for all seasons and acted as the key strategist for Narendra Modi government in its first term.

He helmed the finance, defence, corporate affairs and information and broadcasting ministries. Leaders across the political spectrum paid rich tributes to Jaitley, a quintessential moderate who was never associated with the hard edges of Hindutva politics.

He became a trusted friend of Narendra Modi as he smoothed the path for the Gujarat leader's rise in the BJP by helping him win key allies.

Jaitley played an instrumental role in implementation of Modi's various ambitious schemes and programmes after the BJP came to power in May 2014.

His most important legacy will be rolling out of Goods and Services Tax (GST) in 2017, the biggest tax reforms after Independence.

Prime Minister Modi, who is on a three-nation tour, said he had lost a valued friend and conveyed his condolences to Jaitley's wife and son.

"With the demise of Arun Jaitley Ji, I have lost a valued friend, whom I have had the honour of knowing for decades.

"His insight on issues and nuanced understanding of matters had very few parallels. He lived well, leaving us all with innumerable happy memories. We will miss him!" the prime minister said. In his two brief stints as defence minister, Jaitley cleared the path for ushering in a raft of long-pending reforms in the armed forces and came out with key policy initiatives with an aim to make India self reliant in defence production.

He was among the BJP bigwigs who made a smooth transition from the Atal-Advani era in the party to the one where Narendra Modi dominated, ushering in the rise of new generation leaders.

His death is another jolt to the BJP after the demise of Sushma Swaraj, a contemporary of Jaitley and one of its prominent faces, on August 6. Party leaders mourned Jaitley's loss, remembering him as a dear colleague, mentor and guide and hailing his contribution to the growth of the party and the nation.

Jaitley, an urbane and media-savvy leader and a legal luminary, was one of the sharpest political minds not only within the BJP but also in the larger political spectrum where he made lifelong allies cutting across the ideological divide.

Paying homage to Jaitley, Congress chief Sonia Gandhi and other opposition leaders said his contribution to public life will be remembered forever.

A gifted raconteur whose interest spanned from politics to Bollywood to sports, his informal gatherings were always a full house as journalists, friends and politicians enjoyed his wit, sarcasm- which singed his colleagues and adversaries alike- and grasp of issues that he delivered in his ever relaxed and warm demeanour.

Jaitley was the bridge that the BJP used to win over new allies, and also its warm, affable and persuasive face to bring opposition parties around on key issues. 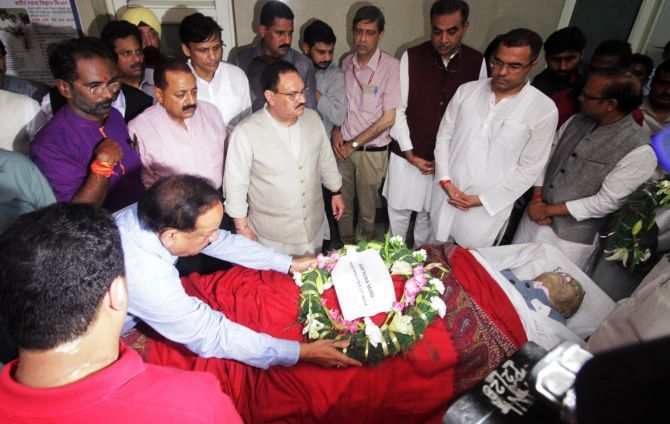 Janata Dal-United president and Bihar Chief Minister Nitish Kumar was his personal friend for decades after he played a key role in ensuring that he is projected as the chief ministerial candidate of the BJP-led National Democratic Alliance.

In his condolence message, L K Advani said Jaitley was known and respected for his "sharp, analytical mind and everyone in the BJP always depended on him for finding solutions to complex issues." "He was also someone who valued and nurtured his friendship with people across the political spectrum. As a person, Arunji will be remembered as a soft-spoken, erudite and warm hearted person," he said.

"A food lover, he never failed to recommend good restaurants to me. Also on every Deepawali, he made it a point to come with his family to our home to wish us," Advani added.

Jaitley had undergone a renal transplant on May 14 last year at AIIMS, and his health condition gradually worsened, forcing him to take frequent breaks from his work.

He was also diagnosed with soft tissue cancer.

He opted out of the second term of the BJP-led NDA government as Modi led the saffron party to a landslide win in May this year. Jaitley, who had lost the 2014 general election did not contest the 2019 Lok Sabha polls, because of his ill-health.

He stopped attending office since early April last year, but was back in the finance ministry on August 23, 2018.

In September 2014, he had undergone bariatric surgery to shed weight he had gained because of a chronic diabetic condition.

After his demise, Jaitley's body was taken to his South Delhi residence where several top leaders paid floral tributes.

On Sunday morning, his body will be taken to the BJP headquarters before the final journey.