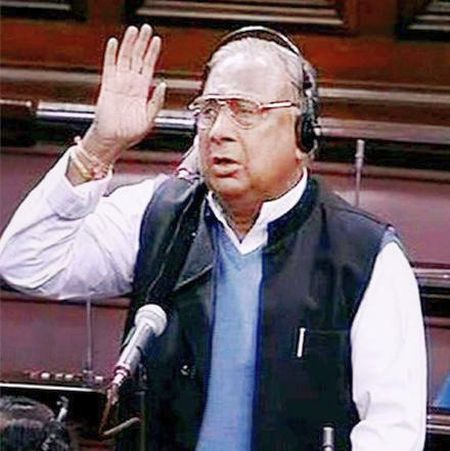 Former Congress MP V Hanumantha Rao was on Friday booked after he allegedly abused a police official in the Telangana State Assembly premises when the cop did not allow him to proceed towards media point.

Following a complaint by the Additional Inspector P Sudhakar a case was registered against Rao under sections 353 (assault or criminal force to deter public servant from discharge of his duty), 504 (intentional insult with intent to provoke breach of peace) and other relevant sections of IPC, a police official told PTI.

The police official was on Thursday performing his duty at the assembly and as per rules no former MP or former MLA is supposed to hold press meets at the media point of the assembly when it is in session.

When the additional inspector tried to stop Rao he allegedly abused him in a "filthy" language, the inspector alleged in his complaint to the Saifabad Police.

A video in which Rao is seen shouting at the police official started making rounds on social media.

The Congress leader is seen shouting at an official identified as P Sudhakar, an additional inspector of police attached to Kamatipura Station, in the video for not allowing him to go to the media point located in the assembly premises.

Sudhakar was on duty at the assembly.

The video shows the inspector trying to stop Rao by informing him that he had instructions from his seniors not to allow any former MLA, MLC or MPs to the media point.

"Who are you to stop me? You have no right to stop. I am AICC secretary. This is not dictatorship. Tell your CM (Chief Minister K Chandrasekhar Rao), I can go and sit in front of his house," Rao is seen saying in the video.

Sudhakar is seen pleading with the former Rajya Sabha member that he had only told him about the restrictions but had not stopped him.

An infuriated Rao continued to vent his anger and proceeded to the media point.

Rao, a former PCC President, said he used to go to the Congress Legislative Party office located in the Assembly even when the session was not on.

"A police officer stopped me when he has no right to do so. Assembly Marshal allowed me to go. But the inspector stops. I questioned that and asked him on what authority he is stopping me. In fact they (police) have insulted me. Who gave orders to stop me. There is no answer. I have respect for police," Rao told reporters.