The formation of the Union Territory of Ladakh evoked mixed reactions from political parties in the region, with those in Kargil observing it as a 'black day' and leaders in Leh seeing it as an opportunity for development. 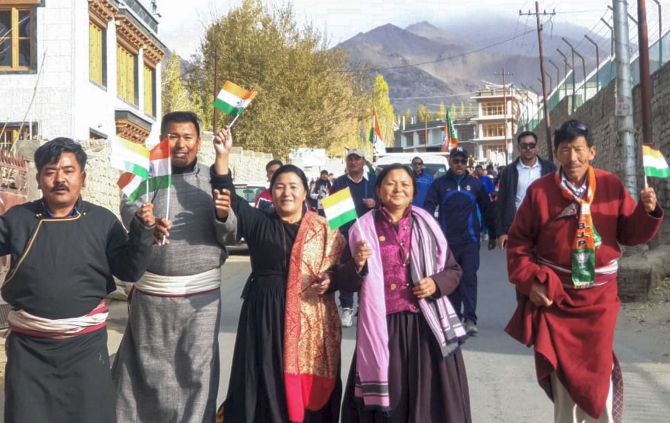 Jammu and Kashmir on Thursday transitioned from a state into Union Territories of Jammu and Kashmir, and Ladakh, nearly three months after Parliament abrogated the state's special status.

The people of J-K have accepted the carving out of Ladakh as an union territory, said Bharatiya Janata Party MP from Ladakh Jamyang Tsering Namgyal, who stole the show during a debate on the bifurcation of the state in Lok Sabha with his comment "picture abhi baki hai" (the end is yet to come)'.

"The people of Ladakh have been waiting for this for the last 71 years. We see this move as an inclusive development plan. This place has immense potential for border security, defence, ecosystem and medicinal plants, besides tourism.

"Developing this into a UT will bring in more opportunities for infrastructure development", he said.

Markets were shut in Kargil town from Wednesday and a joint action committee, comprising political and religious groups, observed October 31 as a 'black day'.

Former chairperson of the Kargil Hill Development Council Asgar Ali Karbalai expressed unhappiness over Ladakh becoming a UT and said "we are totally against this decision".

"We have been continuously protesting against this and for the last three days, people are on the roads, markets are shut and public transport is off the roads," he said.

The people of Kargil are against the abrogation of Article 370 provisions and the bifurcation of the state into the two union territories as "this are against our interests", Karbalai said.

"This is an imposed decision without the consent of the people. We have now been left without any legislative or powers," he said.

Chairman and CEC of the Ladakh Autonomous Hill Development Council (Kargil) Feroz Ahmed Khan said that "though the move is expected to bring development, people have apprehensions about education and jobs. They want more job security".

"If education and other spectrums are open to all, people are apprehensive about whether their children will be able to compete and secure good jobs," the he said, favouring reservation for children in the Kargil division of Ladakh. 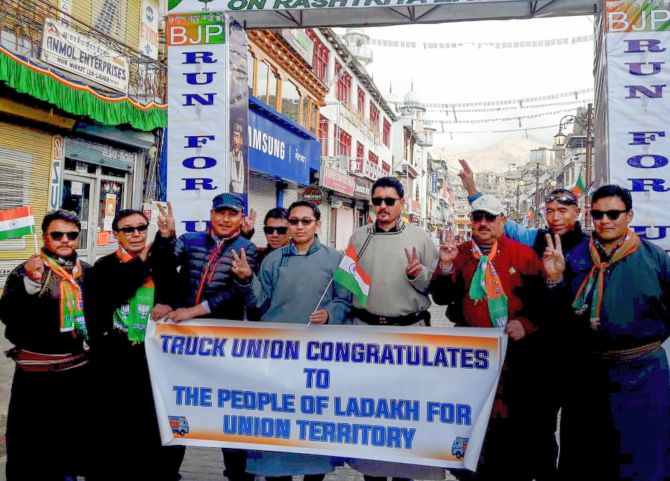 Former legislative council member from Kargil Aga Syed Ahmed Razvi said, "Kargil is being discriminated and left aside again. Earlier, too, we were separated and even now without our wish, this was done".

Kargil is facing intense issues of infrastructure, connectivity and development as the Centre's attention is more on Leh, he said, adding that the division needs more attention but it has been getting a step-motherly treatment.

"We are not saying that we have issues with development in Leh but why not Kargil. Kargil has the biggest trade and business opportunity to offer," Razvi said.

"The citizens did not want this bifurcation. We are not azadi seekers, we want unity and justice. Even when this bifurcation has happened, there should be a balance between Kargil and Leh," he said.

Terming Kargil and Leh as two eyes of Ladakh, he said that "one eye should not be discriminated from another. The previous governor promised to give us regional status but Leh has got a better deal and issues for Kargil are growing rather than getting solved. We are therefore protesting".

Former MLA from Nubra Valley Deldan Namgyal said "we welcome the decision of the UT but, we were expecting inclusion in the sixth schedule to protect our culture and economic aspects."

"We are waiting for an announcement from the Centre. Political and religious organisations are showing their resentment for not including us in the sixth schedule. We are happy with the UT decision, but we are also showing resentment as there is no protection". 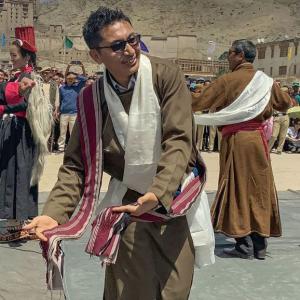