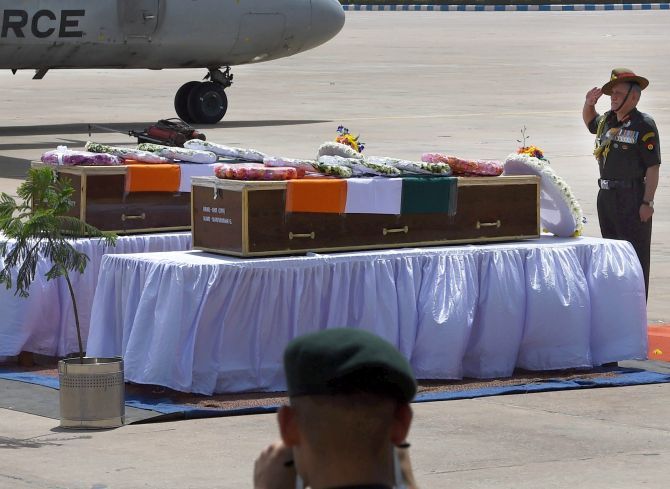 Army Chief Gen Bipin Rawat and top brass of the force on Sunday paid glowing tributes to the two soldiers who were killed in a terrorist attack near Qazigund on the Srinagar-Jammu national highway.

"For a soldier, work is his religion... work is worship for us," Gen Rawat said after paying homage to the soldiers -- Naik Dipak Kumar Maity and Manivannan G -- at Palam airport.

The two soldiers were killed after terrorists attacked an army convoy on Saturday on the Jammu-Srinagar highway. Four other soldiers were wounded in the attack.

"We must all pay our respect and homage to these brave soldiers who have attained martyrdom in the line of duty," Gen Rawat added.

The mortal remains of the two soldiers are being taken to their native places where they will be laid to rest with full military honours.

Maity, 43, hailed from Midnapur in West Bengal and had joined the army in 1997. He is survived by his wife Rikta and a 13-year-old daughter.

Hailing from Thiruvannamalai in Tamilnadu, 25-year-old Manivannan had started his career in the Army in 2013. He is survived by his parents -- mother G Chinnaponnu and father Gopal G.

Gen Rawat had on Saturday visited formations on the Line of Control in north Kashmir and was briefed on the operational and logistical preparedness of the force.

During his visit, which followed repeated instances of ceasefire violations by Pakistan in recent times, he exhorted soldiers deployed in the Valley to maintain utmost vigil and operational focus.

He had also called on J-K Governor N N Vohra and discussed the internal and external security management issues in the state.