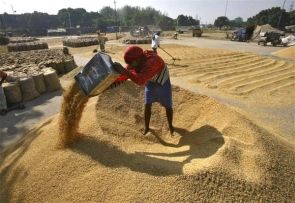 Critical of the hurried clearance of the Food Security Ordinance, Bharatiya Janata Party President Rajnath Singh said on Thursday the United Progressive Alliance government was just doing a "political gimmick in a hurry" before the 2014 general elections.

Expressing surprise at why the government took the ordinance route instead of discussing the "serious bill" in Parliament, Singh said, "The Lok Sabha election is near. The Congress-led UPA is taking populist measures. The Food Security Bill is one of them." "They are bringing it through an ordinance. It is just a political gimmick in hurry," he alleged. He wondered what prevented the government from taking up the bill "for the last nine years" and holding a debate in Parliament and said the BJP wants a debate on this.

"This bill has some lacunae. We want to pass it with some modifications. We want a debate on this," he said.

The ordinance on food security gives the country's two-third population the right to get 5 kg of foodgrains every month at highly subsidised rates of Rs 1-3 per kg. The Union cabinet, which had last month deferred a decision on the issue following differences, approved promulgation of an ordinance to implement the bill.

The programme, when implemented, will be the biggest in the world with an estimated spending of Rs 125,000 crore annually on supply of about 62 million tonnes of rice, wheat and coarse cereals to 67 per cent of the population. Singh also defended the Gujarat government in the Ishrat Jahan encounter case, which has been termed as fake by the Central Bureau of Investigation, and sought to enquire the victim's link with terrorist groups.

Singh said, "More than 3,000 encounters took place in the country before 2003. But to get political mileage, a big hype is created in this case and the central government has brought the Central Bureau of Investigation against the IB. The track record of Ishrat Jahan should be checked if she had any link with terror groups and then make it public," he said.

Nine years after 19-year-old Jahan was killed along with three others by the Gujarat police, the CBI on Wednesday ruled out her involvement in terror activities and said she was accompanying Javed Sheikh on his trip to Ahmedabad as he was her employer.

On granting autonomy to the CBI, the senior leader and MP said that it should get functional autonomy. On the performance of the UPA, Singh said the government had failed on all fronts -- economic, security and diplomatic. He described the current economic situation in the country as similar to that of 1991 and pointed out that foreign investors were withdrawing from the country. "Economic progress has come to a halt. There is a very humiliating situation for India in front of the global economic scenario," he said.

Singh also charged the government with not taking a strong position in the international diplomatic platform regarding growing influence of China.

On illegal immigration from Bangladesh, he said, "The UPA is not serious to stop the illegal immigration. There is no proper system of identifying Bangladeshi people. We are also not taking up issue with Bangladesh government. Besides, India is not doing enough regarding extradition of United Liberation Front of Assam leader Anup Chetia from the neighbouring nation."

On the India-Bangladesh land swap deal, Singh said whatever land India gives away, it should be compensated and it should be carried out in discussion with Assam and West Bengal.