With the Maharashtra government on Thursday amending its air travel rules in view of global concerns over the Omicron variant of coronavirus, the Brihanmumbai Municipal Corporation cancelled its previous guidelines issued to the city airport authorities and asked them to follow the revised ones as issued by the state. 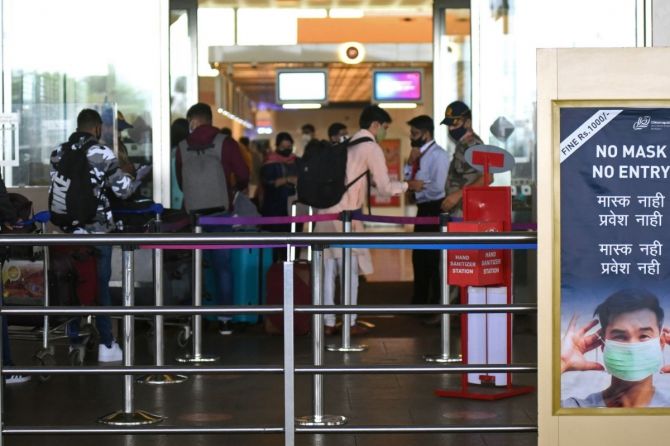 The state government's amended air travel rules mandates seven-day institutional quarantine of passengers from only three 'high-risk' countries -- South Africa, Botswana and Zimbabwe -- while for domestic travel, passengers will either have to be fully vaccinated, or carry negative RT-PCR test report obtained within 72 hours before boarding.

On Wednesday, the Mumbai civic body had mandated all domestic passengers landing at the city airport to carry a negative RT-PCR report not older than 72 hours.

It had also asked the airport officials to follow the guidelines issued by the Centre and the Maharashtra government about self-paid post arrival COVID-19 test at the airport and the passengers arriving from 'at risk countries' should compulsorily undergo institutional quarantine for one week.

In the letter to chief executive officer of the Mumbai International Airport Limited, the BMC said that the order issued on December 1 by the civic body 'stands cancelled immediately' as the Maharashtra government's order issued on Thursday 'superseded' the earlier order.

The civic body also directed the airport authorities to comply with the state government's order, which will come into effect starting from 23:59 hours on December 2.

According to a BMC official, between November 30 and December 1, four travellers from various countries, including South Africa, and a close contact of an infected traveller, have tested COVID-19 positive. All of them have been admitted to Seven Hills Hospital for treatment and their samples have been given for genome sequencing.

Mumbai Mayor Kishori Pednekar told reporters that some samples have been sent to Pune for genome sequencing in order to get the reports quickly.

Stating that not a single patient has been infected with the Omicron variant of the virus in the city so far, she said, "Mumbaikars should not be scared, but it is equally important to remain careful."

Pednekar appealed to the citizens to take utmost care to avoid the spread of the virus and added that that the number of testing booths at the airport have been increased from 50 to 80, besides upgrading the screening facility.