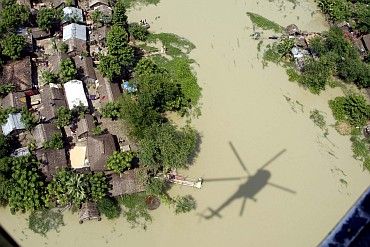 The flood situation on Sunday worsened in Bihar where two more people lost their lives taking the death toll to 36, while flood waters entered fresh areas, pushing up the number of affected districts to 17.

“One death each has been reported from Patna and Gopalganj district on Sunday taking the flood toll to 20. However, if deaths caused by house and riverbank collapse, electrocution, snakebites or drowning are taken into account, the toll will go up to 36,” Disaster Management Department Emergency Control Room in-charge C B Pandey said.

Over 18.2 lakh people in the state are now reeling under floods. Pandey also said flood waters from Mahananda river entered parts of Purnia district on Sunday taking up the number of affected districts to 17.

The DMD is running 146 relief camps to provide food and shelter to around 33,200 rescued and displaced persons. The number of people staying at the camps is decreasing as many have left to go to their relatives’ places.

Seeing the trend of heavy rainfall in the Nepal catchment areas of several rivers flowing through Bihar, the Central Flood Control Room of the state Water Resources Department has issued a communique to all its chief engineers to keep their subordinates on alert and conduct intensive patrolling on the river embankments to negate any chance of breach.

Meanwhile, Chief Minister Jitan Ram Manjhi did an aerial survey of Nalanda district and held a meeting with ministers, MLAs and senior officials over the flood situation.

Manjhi said the state government will not allow any scarcity of funds to hamper relief operations and directed the officials to prepare an estimate of all flood-related losses within 15 days.