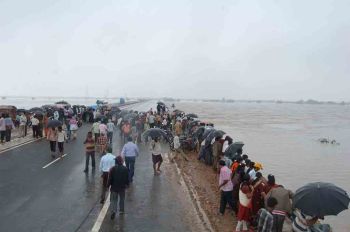 The Andhra Pradesh government has sounded an alert and ordered evacuation of people from several places in Guntur district in view of the increasing outflow of water from Nagarjuna Sagar to Prakasham barrage.

People living in low-lying areas of Vijaywada city, the commercial capital of Andhra Pradesh, have also been asked to evacuate.

State Chief Minister K Rosaiah has put the toll in the rain and flood related mishaps over the last two days at 27. However, given the extent of devastation and reports of missing people in Kurnool and Mehbubnagar districts, the figure is likely to rise significantly.

Meanwhile, Y S Jaganmohan Reddy, son of late chief minister Y S Rajasekhara Reddy, has announced a donation of Rs 20 lakh to the chief minister's relief fund from the YSR Foundation for relief measures in flood-hit areas of the state.

Jagan, a member of Lok Sabha from Kadapa, has also urged his supporters to particiapte in the relief works.