The brief, intense rain spells in a couple of regions in Kerala indicated mini cloudbursts, a factor that also led to casualties, damage and loss of properties, a scientist at the Cochin University of Science and Technology claimed on Sunday. 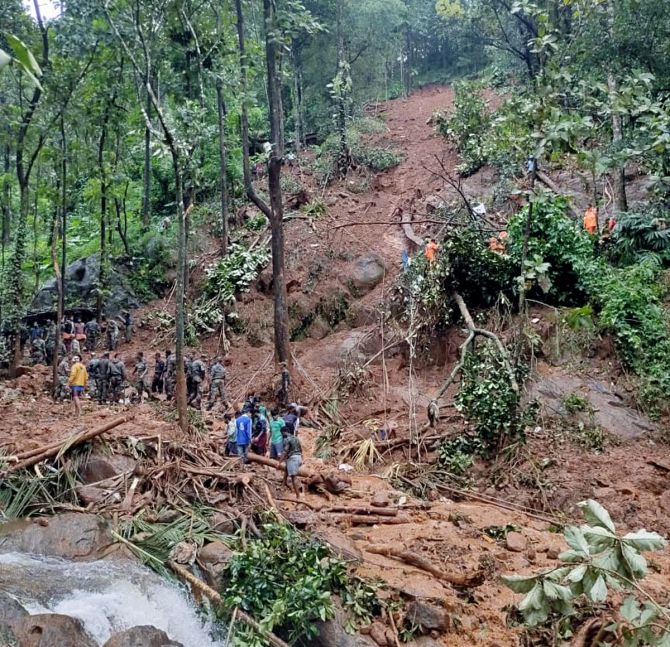 Citing more than 5 cm rain received in two hours in worst affected areas of Idukki and Kottayam districts, S Abhilash of the Department of Atmospheric Sciences, CUSAT said it was a "mesoscale mini-cloudburst type of event".

Mini cloud bursts are marked by intense short spells which may not exceed 10cm in one hour-a classical definition by India Meteorological Department, he noted.

Abhilash told PTI that the high range areas of Western Ghats region in Kerala is very susceptible to landslides.

The starting point of the catastrophe in Idukki and Kottayam are the cloud bursts in the high ranges and the sudden, heavy rainfall continued leading to landslides and flash floods resulting in loss of lives and destruction properties, he said.

The damage potential of less intense rain spells (about 5 cm in 2 hours) may cause flash floods and landslides along the slopes of Western Ghats mountains and Himalayan regions, Abhilash has said in an article published in the latest issue of a state government publication.

Heavy rainfall for a short duration especially from mesoscale mini cloudburst events also brings runoff water beyond the carrying capacity of the streams and flushes off rainwater faster and rivers and midland regions of the west coast often may experience the frequent occurrence of flash floods, he said.

The combined effects of cloudburst, landslides and flash floods may get aggravated by degradation of land due to human activities such as the conversion of forests to plantation and crop fields, Abhilash opined.

Changes in Kerala's climate received more attention during recent times as evident from back-to-back drought conditions during 2015 and 2016.

In 2017 Kerala was hit by the cyclonic storm "Ockhi" and catastrophic flood and landslide episodes followed during 2018, 2019 and 2020, he has claimed.

At least 18 people have died and several displaced in the extreme weather events that occurred in Kerala on Saturday.