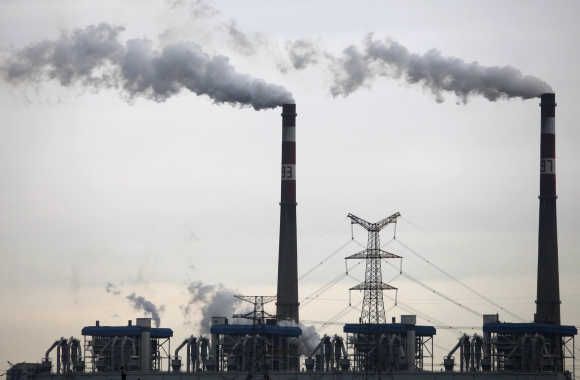 Four of these states get electricity from Adani Power's 4,620 MW thermal power plant and Tata Power's 4,000 MW ultra-mega power project, both at Mundra in Gujarat.

Adani Power shut down about six generating units at its 4,620 MW Mundra plant in Gujarat, last week. This plant supplies electricity to Haryana and Gujarat.

Tata Mundra project supplies power to Maharashtra, Gujarat, Rajasthan, Haryana and Punjab while that of Adani gives electricity to Gujarat and Haryana.

Last Monday, the Supreme Court had stayed the Appellate Tribunal for Electricity's interim order allowing compensatory tariffs for the two Mundra projects. These projects have been impacted by change in Indonesian coal pricing policy.

Following a change in Indonesia's coal-price regime in 2011, both Tata Power and Adani Power had approached Central Electricity Regulatory Commission seeking relief, which allowed them to charge higher tariffs from the state utilities as compensation for the costlier fuel.

The state discoms challenged this order before the appellate tribunal which directed them to pay compensatory tariff for March to May in six installments.

The discoms moved the Supreme Court against the appellate tribunal's decision.

Power ministers and representatives of five states, which are hit by energy crisis, met Union Minister Piyush Goyal on Tuesday.

After the meeting, Goyal said: "The hydel projects are not doing well due to deficient monsoon hence pressure on thermal projects."

According to the Central Electricity Authority, of the 100 power plants monitored by it, 27 had less than four day' of stock.
“There has been a little fall in supply from Central Coalfields, owing to rain and rake availability issues. But Coal India Limited is able to maintain its committed supply,” said another company official.

The CIL, which accounts for 80 per cent of India's coal production, has clarified it is not to be blamed for stocks at power plants dropping to critical levels.

A high plant loading factor and delay related to coal imports were reponsible for the problem, it said.

It argued its supplies were based on fuel supply agreements, adding had it been at fault, a penalty clause would have been triggered against it.

A CIL official said, “One should not forget CIL’s commitment is only for 65 per cent of the total requirement of new plants and 90 per cent of old plants, failing which the penalty clause should apply. But there has been no case in which CIL will have to pay a penalty.”

“In some cases, the PLF is about 100 per cent, even at new plants. It is natural there will be low stocks. There is no solution against low stocks in these plants, as they will get domestic coal only to the extent of 65 per cent of the total requirement, according to the fuel supply agreements. Plants are running at 100 per cent PLF, against the normative 85 per cent; also, they haven’t arranged for imported coal,” he added.