The first healthy volunteer has now received a coronavirus vaccine developed by Imperial College London researchers, the team behind the project said on Tuesday. 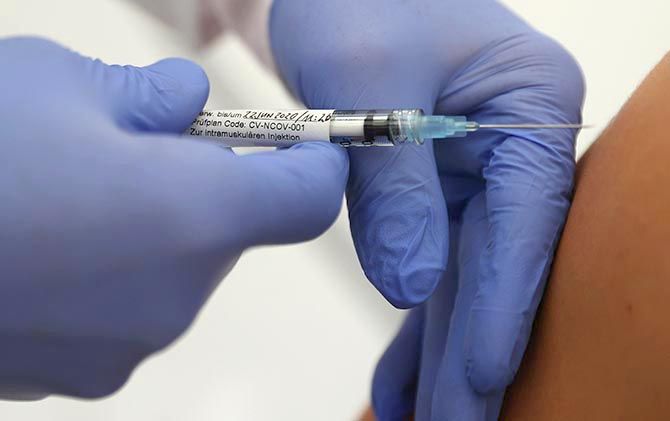 The clinical team, who delivered a small dose of the vaccine to the participant at a west London facility, are closely monitoring the participant and report they are in good health, with no safety concerns.

The human trials of the vaccine are also the first test of a new self-amplifying RNA (saRNA) technology.

"We have reached a significant milestone in this ground-breaking study with the first dose of a self-amplifying RNA vaccine delivered safely,” said Dr Katrina Pollock, from Imperial's Department of Infectious Disease and Chief Investigator of the study.

“We are now poised to test the vaccine in the dose evaluation phase before moving forward to evaluating it in larger numbers,” she said, adding that thousands have been signing up to be a part of the ongoing vaccine studies.

The team say that it has undergone "rigorous" pre-clinical safety tests and in animal studies it has been shown to be safe and produced encouraging signs of an effective immune response.

The new saRNA technology being trialled with it is claimed to have the potential to revolutionise vaccine development and enable scientists to respond more quickly to emerging diseases.

"The first participant marks an important step for our saRNA vaccine platform, which has never before been trialled in humans,” Professor Robin Shattock, from the Department of Infectious Disease at Imperial College London, who is leading the work.

“We now eagerly await rapid recruitment to the trial so that we can assess both the safety of the vaccine and its ability to produce neutralising antibodies which would indicate an effective response against COVID-19,” he said.

The first volunteer, who has asked to remain anonymous, has now received a first dose vaccine, with a second booster dose to follow within four weeks. Several others are expected to receive a first dose over the coming days.

The clinical team will continue to monitor all participants closely for safety, as well as looking to see if they produce antibodies against the SARS-CoV-2, or COVID-19, virus.

In the initial stage of the trial, 15 healthy volunteers are receiving the vaccine – starting with a low dose and escalating to increasingly higher doses for subsequent volunteers – to assess safety and to find the optimal dosage. Over the coming weeks, 300 healthy participants are expected to receive two doses of the vaccine.

If the vaccine is safe and shows a promising immune response in humans, then larger trials would be planned for later in the year.

The Imperial College London vaccine is the UK's second major vaccine candidate alongside one being tested by Oxford University, also backed by the UK government through its ongoing human trials.