The first COVID-19 vaccine to reach phase I clinical trial is safe, well-tolerated, and capable of generating an immune response against the novel coronavirus in humans, says a new research published in The Lancet journal. 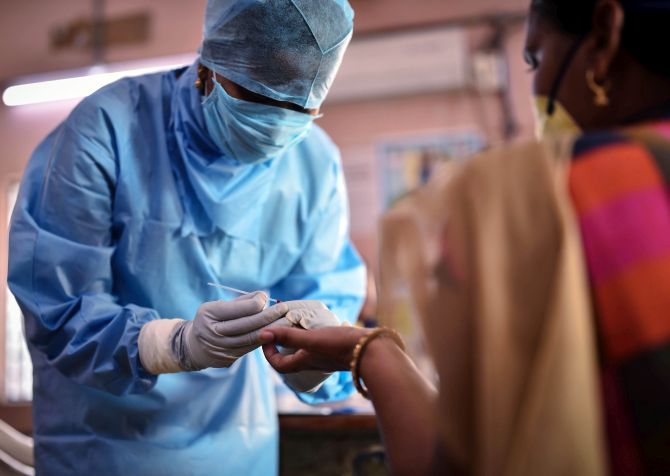 According to the study of 108 adults, the vaccine produced neutralising antibodies, and a response mediated by the immune system's T-cells against the novel coronavirus, SARS-CoV-2.

However, the scientists, including those from the Beijing Institute of Biotechnology in China said further research is needed to confirm whether the vaccine protects against SARS-COV-2 infection.

In the trial, carried out in 108 healthy adults, the vaccine demonstrated promising results after 28 days, with the final results to be evaluated in six months, the study said.

Based on the results, Chen said the vaccine is a potential candidate for further investigation.

However, the researchers cautioned that the results should be interpreted carefully.

"The challenges in the development of a COVD-19 vaccine are unprecedented, and the ability to trigger these immune responses does not necessarily indicate that the vaccine will protect humans from COVID-19," Chen explained.

The Ad5 vectored COVID-19 vaccine used in the trial is the first to be tested in humans, the scientists said.

It uses a weakened common cold-causing adenovirus -- which infects human cells readily, but is incapable of causing disease -- to deliver genetic material that codes for the SARS-CoV-2 spike protein to the cells, the study noted.

The scientists said these cells then produce the spike protein, and travel to the lymph nodes where the immune system creates antibodies.

These then recognise the spike protein and fight off the coronavirus, the researchers explained.

In the trial, they assessed the safety and ability of the new Ad5-nCoV vaccine to generate an immune response of different dosages in 108 healthy adults between the ages of 18 and 60 years.

The volunteers were assigned to receive either a single injection of the new Ad5 vaccine at a low dose, middle dose, or a high dose, they said.

According to the study, the volunteers' blood was checked at regular intervals following vaccination to see whether the vaccine stimulated two parts of the immune system.

These are the body's 'humoral response', which is the part of the immune system that produces antibodies to fight infection, and the 'cell-mediated' arm, which depends on a group of T cells to fight the virus, the scientists said.

They added that an ideal vaccine candidate generates both antibody and T cell responses to defend against SARS-CoV-2.

Based on the results, the researchers said the vaccine was well tolerated by the volunteers at all doses with no serious adverse events reported within 28 days of vaccination.

They said most adverse events were mild or moderate, with 83 per cent of those receiving low and middle doses of the vaccine and 75 per cent in the high dose group reporting at least one adverse reaction within 7 days of vaccination.

These reactions were mild pain at the injection site reported in over half of vaccine recipients, fever in 50 per cent of them, fatigue, headache, and muscle pain as well.

Within two weeks of vaccination, the study noted that all dose levels of the vaccine triggered some level of immune response.

Some of the participants, the researchers said, also exhibited a form of neutralising antibodies against SARS-CoV-2.

After 28 days, they said most participants had a four-fold increase in binding antibodies.

The scientists also added that 50 per cent of the participants in the low- and middle-dose groups, and three-quarters of those in the high-dose group showed neutralising antibodies against SARS-CoV-2.

In the majority of volunteers, they said the vaccine also stimulated a rapid T cell response.

On further analyses, the researchers said the majority of recipients showed either a positive T cell response, or had detectable neutralising antibodies against SARS-CoV-2 as much as 28 days after vaccination.

However, they said high pre-existing immunity to adenovirus type 5 -- the common cold virus vector used in the study, may have reduced both the antibody and T-cell response in the participants.

"Our study found that pre-existing Ad5 immunity could slow down the rapid immune responses to SARS-CoV-2 and also lower the peaking level of the responses," said Feng-Cai Zhu from the Jiangsu
Provincial Center for Disease Control and Prevention in China, who led the study.

Citing the main limitations of the trial, the authors said the study had a small sample size and was conducted in relatively short duration, with a lack of randomised control group.

They said further research will be needed before this trial vaccine becomes available to all.