Stampede-like situation as fire breaks out in Kolkata Metro; 16 injured 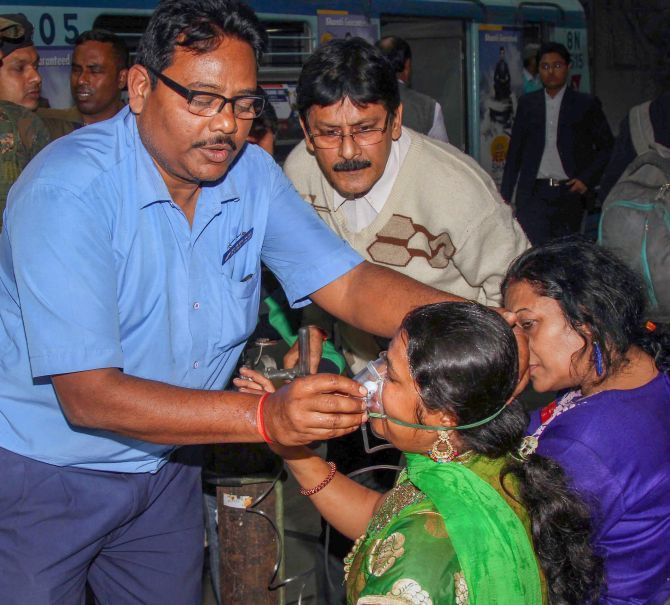 IMAGE: Rescue officials offer an oxygen mask to a metro passenger after several passengers were taken ill due to smoke inside an air-conditioned coach of the Kolkata Metro, in Kolkata, on Thursday. Photograph: PTI Photo

A fire broke out on board a metro train in Kolkata during rush hour on Thursday, causing a stampede-like situation and leaving at least 16 passengers injured.

Following the fire in its electrical unit, dense smoke engulfed the Dum Dum-bound air-conditioned train soon after it left the Maidan station in the heart of the city around 5 pm.

Passengers claimed they were trapped inside the train for over an hour and did not receive any help from authorities even after calling the helpline repeatedly.

Metro Railway has order a high-level inquiry to ascertain the reason and the source of the fire, its chief public relations officer Indrani Banerjee said.

All passengers of the train were evacuated by 6 pm through the motor man's cabin, she added.

The incident disrupted metro services during peak hours leaving many stranded across stations in its 27-km network, which is run by the Indian Railways.

Banerjee said, "A lot of smoke was seen as soon as the train left the Maidan station. We understood since there is smoke, there must be fire somewhere."

"We switched off the power connection and took steps to douse the fire. We have rescued all the passengers and there was no casualty," she added.

Some of those who fell ill became unconscious and were taken to the nearby SSKM hospital, officials said.

Passengers claimed around 40 persons fell ill due to suffocation and a stampede-like situation occurred inside the train. However, officials said that the number injured were 16.

Some of them even fainted and most of the elderly passengers faced breathing problems due to smoke, said a commuter.

Passengers also said that they had to break window panes for ventilation inside the coach. "We were trapped inside the metro for more than an hour," said a passenger.

"We shouted for help but there was no response from the authorities. Some of us then broke window panes to ensure that there was some sort of ventilation," another passenger said.

Kolkata metro rail, the country's first, have been plagued by frequent snags over the last couple of years.

It is mainly blamed on the metro's ageing fleet, stressed infrastructure and delay in induction of new coaches.