The Central Bureau of Investigation on Wednesday told the Bombay high court that Rhea Chakraborty's accusation that the late actor Sushant Singh Rajput's sisters obtained a fake medical prescription for him was 'mostly speculative'. 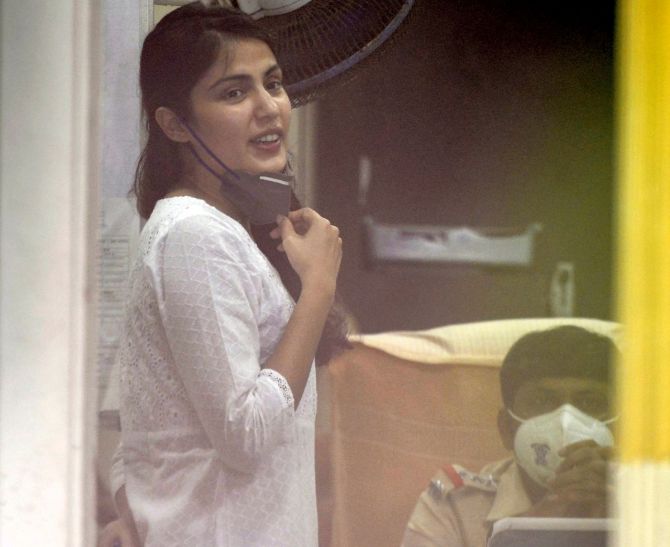 Such speculation cannot be the basis of an FIR, the CBI said in response to Rajput's sisters Priyanka Singh and Meetu Singh's petition seeking to quash the case lodged against them by the Mumbai police.

Chakraborty, Rajput's girlfriend, above, alleged that a fabricated prescription was used to help him procure medicines banned under the Narcotic Drugs and Psychotropic Substances Act only a few days before his suicide in June 2020.

'The allegations in the present FIR are mostly presumptive and speculative in nature,' the CBI claimed.

The CBI pointed out that it is probing the complaint filed by Rajput's father K K Singh against Chakraborty and her family members for allegedly abetting the 34-year-old actor's suicide.

Rajput's sisters filed the petition through advocate Madhav Thorat on October 6 seeking that the FIR filed against them by the Bandra police in north west Mumbai be quashed.

The CBI said the police should have conducted a preliminary enquiry before registering the first information report.

'It is settled law that two FIRs cannot be registered on the same cause of action....the CBI is already investigating the causes relating to the death of Sushant Singh Rajput and all aspects surrounding the same,' the CBI told the court.

'In view of this, it was expected from the Mumbai police to forward the complaint received from Rhea Chakraborty to the CBI instead of registering an FIR itself,' the CBI said.

'Therefore, registration of FIR on the same facts and cause of action is both unwarranted and not allowed under law. Thus, this FIR is vitiated and bad in law,' the agency said.

If Chakraborty was aware of the mobile phone chat between Rajput and his sister Priyanka in June 2020 during which Priyanka allegedly sent him a medical prescription, then Rhea should not have kept silent till September, the CBI said.

It was conducting a probe without being hindered by any external factors in an impartial manner, the agency claimed.

The high court will hear the petition on November 4.