Unfazed by FIR over Kaali remark Mahua Moitra dares BJP: 'Bring it on!'

The row over Trinamool Congress member of Parliament Mahua Moitra's comment on Goddess Kali intensified on Wednesday with an FIR being registered against her in Bhopal for allegedly "outraging religious feelings", and the West Bengal unit of the Bharatiya Janata Party demanding her arrest even as Moitra dared the saffron party to "bring it on", saying she was not afraid of its "goons". 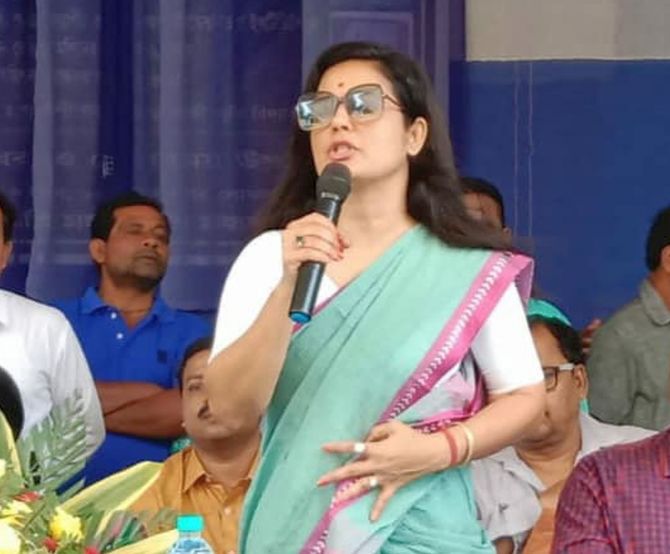 She also said that she was a "Kali worshipper and not afraid of anything".

Moitra on Tuesday triggered a controversy with her remarks that she has every right as "an individual to imagine Goddess Kali as a meat-eating and alcohol-accepting goddess", as every person has the right to worship god and goddess in his or her own way.

While her party, Trinamool Congress, distanced itself from the comment and condemned it, senior Congress leader Shashi Tharoor said he was "taken aback by the attack" on Moitra and urged people to "lighten up and leave religion" to individuals to practise privately.

A senior TMC leader, who didn't want to be identified, said, "The party has taken a serious note about it, and in no way supports such comments. Most likely, an explanation will be sought from her, and she will be cautioned from making such remarks in future."

Demanding her arrest, the Bengal BJP said it would move the court if no action was initiated against her in 10 days by the police.

Leader of Opposition in the West Bengal assembly Suvendu Adhikari said hundreds of police complaints had been lodged against Moitra across the state.

"The TMC government and the state police have been very active in seeking police action against Nupur Sharma. But they have not taken any action against Mahua Moitra. There can't be a different set of rules for BJP and TMC leaders. We will wait for 10 days and then move the court,” he said.

"According to the norms of the Sanatan Hindu dharma, Goddess Kali is never worshipped as a goddess who consumes alcohol and meat. Hindus had been revering Goddess Kali for ages as a symbol of power against evil. Her comments have hurt religious sentiments. We demand her arrest in light of the statement against Goddess Kali," BJP state president Sukanta Majumdar said.

In BJP-ruled Madhya Pradesh, the crime branch of the state police has registered an FIR against the TMC MP under section 295A of the Indian Penal Code (outraging religious feelings), an official said in Bhopal.

"Moitra's statement has hurt the religious feelings of Hindus. We will not tolerate disrespect to any Hindu Gods and Goddesses at any cost," Chief Minister Shivraj Singh Chouhan said in a statement.

The FIR was registered on the complaint of a local tea-seller, who accused Moitra of hurting his religious feelings, according to the police.

"Bring it on BJP! Am a Kaali worshipper. I am not afraid of anything. Not your ignoramuses. Not your goons. Not your police. And most certainly not your trolls. Truth doesn't need back up forces," Moitra tweeted.

Earlier, Tharoor said he was "taken aback by the attack" on the Trinamool Congress MP, and urged people to "lighten up and leave religion" to individuals to practise privately.

In a series of tweets, he said, "I am no stranger to malicious manufactured controversy, but am still taken aback by the attack on @MahuaMoitra  for saying what every Hindu knows, that our forms of worship vary widely across the country. What devotees offer as bhog (offering) says more about them than about the goddess".

"We have reached a stage where no one can say anything publicly about any aspect of religion without someone claiming to be offended. It's obvious that @MahuaMoitra wasn't trying to offend anyone. I urge every1 to lighten up & leave religion to individuals to practise privately," he said.

Actress Swara Bhaskar came out in support of the TMC MP and said, "MahuaMoitra is awesome! More power to her voice!".

"Dear Hindu RW, and others scared by RW; If you don't understand the diversity within Hinduism itself, if you cannot accept the different rituals and traditions of Hindu practice.. aren't you disrespecting our religion?," she added.

Distancing itself from Moitra's comment, the TMC on Tuesday tweeted, "The comments made by @MahuaMoitra at the #IndiaTodayConclaveEast2022 and her views expressed on Goddess Kali have been made in her personal capacity and are NOT ENDORSED BY THE PARTY in ANY MANNER OR FORM. All India Trinamool Congress strongly condemns such comments."

"We can't comment on who is following on Twitter, and who she has decided to unfollow. Only she can talk about it," the TMC leader said.

Moitra's controversial comment came just days after suspended BJP spokesperson Nupur Sharma created a controversy with her remarks on Prophet Mohammed, which triggered protests across the nation and angry reactions from the Gulf nations.

The Kolkata police has summoned Sharma in connection with the comment.