The structure of the unified Municipal Corporation of Delhi started taking shape on Monday with the appointment of five departmental heads and allotment of office spaces to officials of erstwhile north and east civic bodies at its headquarters at the Civic Centre in New Delhi, officials said. 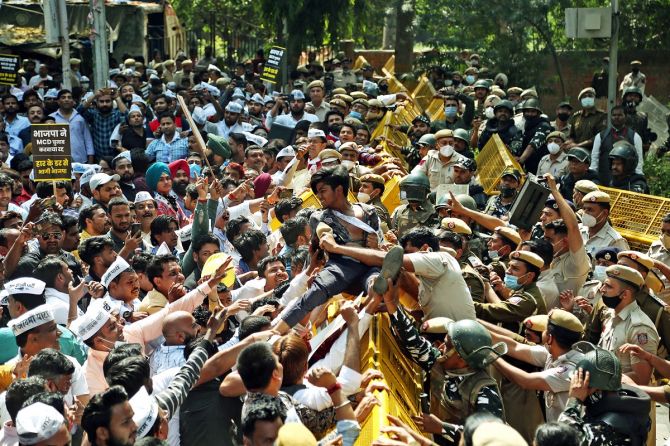 IMAGE: Police personnel try to stop Aam Aadmi Party supporters from marching towards the BJP headquarters during a protest against the postponement of the MCD elections, in New Delhi, March 14, 2022. Photograph: ANI Photo

According to senior officials, nine additional commissioners have been allocated departments and office spaces at different floors of the Civic Centre, while three deputy commissioners were also appointed.

They said the unification process started by bringing some officials of erstwhile east corporation into its head office at the Civic Centre and also by making a single website for the three MCDs.

IAS Ankit Mishra was appointed as the deputy commissioner of Rohini zone while IAS Prince Dhawan has been given charge of Civil Lines zone, an order later said.

The order also said the unified MCD will also have three engineer-in-chiefs.

It added that Dilip Ramnani will look after the works of the EnC for Shahdara (south) and Shahdara (north) zones.

"Appointment of five head of departments have been finalised and rest will be appointed soon. The departments for which HODs have been appointed include education, law, vigilance, IT and press and information," a senior official of the MCD told PTI.

An order issued by the MCD said AK Sharma will be the chief law officer of the unified MCD, Vikas Tripathi will be the MCD's director, education, while Amit Kumar has been appointed as director (P&I).

Sanjay Sahay has been appointed as director vigilance and IAS Prince Dhawan will be the new director (IT), the order said.

The official said appointment of directors of remunerative project cell and advertising departments are next in line.

The MCD was trifurcated in 2012 during Congress leader Sheila Dikshit's tenure as the chief minister. It is now reunified by merging the three civic bodies -- North, South and East municipal corporations.

Soon after assuming charge, MCD Commissioner Bharti issued an order, saying that erstwhile SDMC's Central Establishment Department will act as the nodal department for transfer and posting of officials and staff for the unified MCD.

According to officials, the development of making the erstwhile SDMC's departments as the nodal agency for transfer posting has led to some "unhappiness" among officials of erstwhile North and East civic body staff.

A senior MCD official said making the unified MCD financially stable will be among the key challenges.

"We are examining the possible viable options for making the civic body financially strong. We are constantly holding meetings with officials to zero in on possible solutions," the official said.

The official also said the initial focus of the corporation would be on the issue of waste.

"Waste segregation is an important segment to take care of to ensure cleanliness and effective waste disposal. Clear instructions are being given that landfills has to be shortened. We will ensure that waste segregation is done at source.

"It however requires collective will. It cannot be done by just imposing things but collective campaign has to be done," the official said.