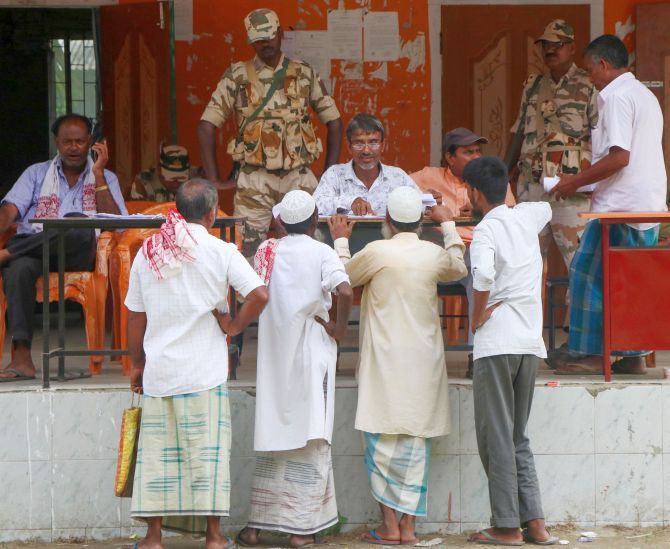 IMAGE: People to check their names on the final list of the National Register of Citizens in Kamrup. Photograph: PTI Photo

The updated final National Register of Citizens, which validates bonafide Indian citizens of Assam, was released on Saturday, with the authority conducting the exercise shutting out the citizenship claims of over 19 lakh applicants who now face an uncertain future.

Those who have been excluded from the National Register of Citizens have 120 days to appeal against it at Foreigners Tribunals. If not satisfied with the verdict of the tribunals, they will have the option to move the high court and the Supreme Court for redress.

In order to assuage the fears of those who could be excluded from the final list, the Assam government has already ruled out their detention "in any circumstances" till the time Foreigners Tribunals declare them foreigners. 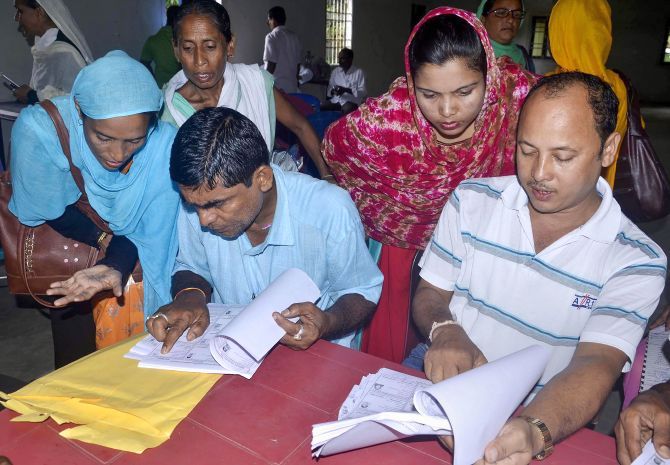 The final list was published at 10 am and the hard copies of the Supplementary List of Inclusions are available for public viewing at the NRC Seva Kendras, offices of the deputy commissioner and offices of the Circle Officer during office hours, a statement by the NRC authority said.

Hundreds of people began thronging these offices soon after the list was released, with some returning home happy and some disappointed.

Notwithstanding apprehensions about disquiet in the wake of the release of the NRC list, Assam was calm with no incident of violence or protests reported from anywhere.

Prohibitory orders under section 144 CrPC were in force in several areas of the state, including Guwahati and Dispur, with over 20,000 central paramilitary forces besides personnel of the state police patrolling the streets in towns and villages.

Surprisingly enough, parties across the political divide called the final NRC faulty, with some saying they would appeal against it in the Supreme Court.

Assam minister Himanta Biswa Sarma, who is also the convener of the North-East Democratic Alliance, the National Democratic Alliance's version in the northeast, deplored that many people who came to India as refugees before 1971 were not included in the final citizenship roll.

He demanded that the Supreme Court allow reverification of at least 20 per cent of samples included in the list in districts bordering Bangladesh and 10 per cent in the rest of Assam.

"Names of many Indian citizens who migrated from Bangladesh as refugees prior to 1971 have not been included in the NRC because authorities refused to accept refugee certificates. Many names got included because of manipulation of legacy data as alleged by many," he tweeted. 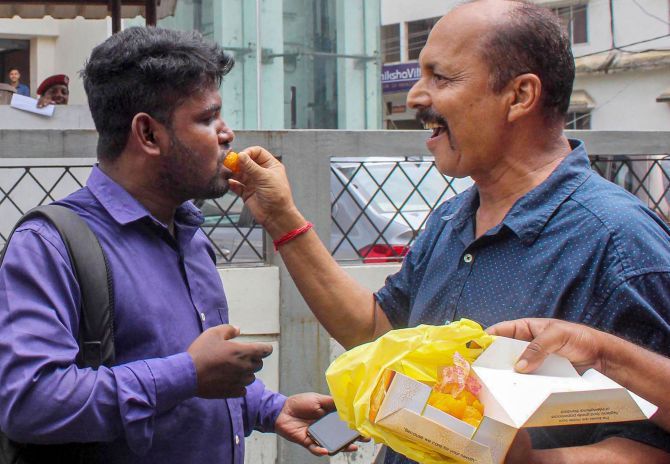 Thrice chief minister of Assam Tarun Gogoi of the Congress said the Centre had failed in its duty to come up with a flawless NRC and that the people of Assam were feeling "helpless".

"The way the NRC was prepared casually, illegal immigrants have been included in the list and genuine Indians excluded. It is the responsibility of the Government of India. We feel helpless.

"The NRC has left 19 lakh people in a precarious situation. They are neither the citizens of India nor are they foreigners...they are neither here nor there. The NRC doesn't come in the way of detecting foreigners. The government must do its duty," he said.

The Assam government once again sought to allay the fears of those left out of the NRC, with Parliamentary Affairs Minister Chandra Mohan Patowary saying it will extend legal support to genuine Indian citizens.

"One thing is sure that many genuine Indians have been left out of the NRC. However, they don't need to panic and worry. They can appeal in the FTs," said Patowary.

If genuine Indians, who have not been included in the NRC, require assistance in appealing before the tribunals, the government will assist them, Patowary, also the spokesman for the the Assam government, added.

Abdul Khaleque, the Congress MP from Barpeta, said he was "not fully satisfied".

"A lot of genuine names have been excluded," he said. IMAGE: Officials check the documents submitted by people at the release of the final draft of National Register of Citizens at an NRC Seva Kendra in Guwahati. Photograph: ANI Photo

The All Assam Students Union, which spearheaded the 6-year movement that culminated in the signing of the Assam Accord of 1985, also said it was not happy with the final NRC and will appeal against it in the Supreme Court. One of the clauses of the accord was "detection, deletion and deportation" of illegal Bangladeshi migrants.

"We are not happy at all. It seems there were some deficiencies in the updatation process. We believe that it is an incomplete NRC. We will appeal to the Supreme Court to remove all the faults and descrepancies in this NRC," AASU General Secretary Lurinjyoti Gogoi said.

Addressing a press conference, Gogoi said the final figure of exclusion did not even come close to those officially announced by authorities on various occasions which ranged from 30 lakh to 50 lakh.

"We are not at all happy about it (the number of exclusions). The figure of 19,06,657 exclusions in the final NRC is too little and we just cannot accept it ... There is scope for its review in the Supreme Court," the AGP leader said.

The AGP is a political party that was floated by AASU leaders who were at the forefront of the students movement. It is a constituent of the BJP-led NEDA. 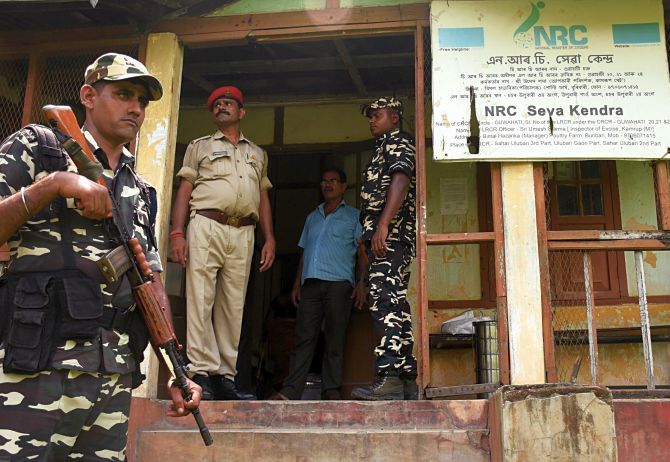 The publication of the final NRC brought both joy and disappointment to the homes of Assam residents.

Durga Khatiwada, a Sahitya Akademi award winner, who did not figure in the final draft, was a happy man after seeing his name on the register.

"I am very happy. I had said I will relinquish my award if my name is not included in the NRC. There is no reason for that anymore," he told reporters.

However, Bimal Choudhury, who said he served as a havildar in the Indian Army, is a dejected man. "I fought for the country, and I don't find my name in the NRC. I am extremely worried," he said.

The preparation of the NRC, a mammoth exercise involving 52,000 officials who scrutinised over six crore documents over four years, was mired in controversies many times.

The names of family members of former President Fakhruddin Ali Ahmed and former chief minister Anwara Taimur were found missing from the draft. To his amazement, even Prateek Hajela, the IAS officer who supervised the conduct of the exercise, was not mentioned in the first draft that was published in December 2017.

When the complete draft was released on July 30 last year, over 40 lakh people were excluded from the list. An additional 1,02,462 people were left out in June this year, taking the total number of those excluded to 41,10,169.

However, it got pared down to little over 19 lakh in the final register.

Following is the timeline of the immigration issue in Assam since Independence to the publication of the final National Register of Citizens on Saturday.

1950: Immigrants (Expulsion from Assam) Act comes into force following influx of refugees from then East
Pakistan to Assam after partition.

1964-1965: Influx of refugees from East Pakistan due to disturbances in that country.

1971: Fresh influx due to riot and war in East Pakistan. Independence Bangladesh comes into existence.

1979-1985: Six-year-long Assam agitation, spearheaded by the All Assam Students' Union and All Assam Gana Sangram Parishad for detection, disenfranchisement and deportation of foreigners.

1983: Massacre at Nellie in Central Assam which claimed the lives of over 3,000 people. Illegal Migrants (Determination by Tribunals) Act passed.

1985: Assam Accord signed by the Centre, the state, AASU and AAGSP in the presence of then Prime Minister Rajiv Gandhi. It stated, among other clauses, that foreigners who came to Assam on or after March 25, 1971 shall be expelled.

1997: Election Commission decides to add 'D' (doubtful) against names of voters whose claim to Indian citizenship is doubtful.

2009: Assam Public Works, an NGO, files case in the Supreme Court praying for deletion of foreigners's name in electoral rolls and updation of NRC.