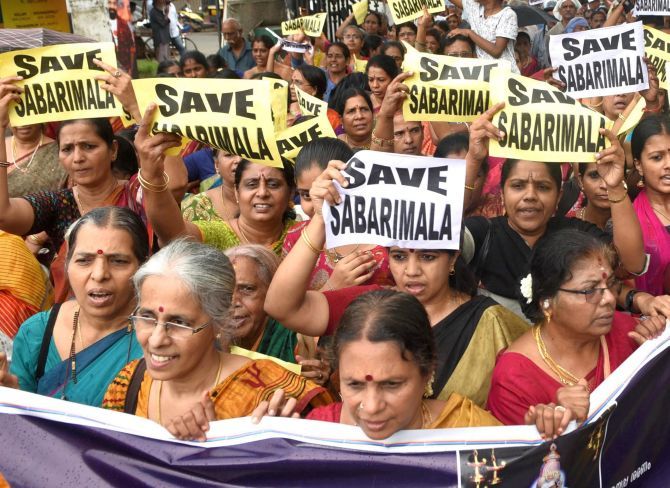 As many as 51 women of menstrual age have entered Sabarimala temple since the Supreme Court lifted the bar on the entry of this age group last September, the Kerala government told the apex court Friday but the first ever official record on this set off a controversy.

A bench of Chief Justice Ranjan Gogoi and Justices L N Rao and Dinesh Maheshwari was hearing a petition of 42-year-old Bindu, a college lecturer and Communist Party of India-Marxist-Leninist activist from Kozhikode district's Koyilandy, and Kanakadurga, 44, a civil supplies department employee from Angadipuram in Malappuram, who entered the Sabarimala shrine on January 2.

At the outset, senior advocate Vijay Hansaria, appearing for the Communist Party of India (Marxist)-led Left Democratic Front government told the bench that till now 51 female devotees have entered Sabarimala temple during the ongoing annual pilgrimage season and all of them are being provided adequate security.

'In this regard it is submitted that a total of 7,564 women between the age of 10 and 50 years had registered for darshan and as per the digitally scanned records around 51 women in this group have already visited the shrine and had darshan without any issue,' an affidavit of Kerala government given to the court stated.

It is for the first time that the state government has stated that 51 women in the previously barred age group have entered the temple.

But the affidavit triggered a controversy in Kerala after it made public details of the Aadhaar and telephone numbers of the 51 women with one of those mentioned turning out to be a man.

The Bharatiya Janata Party, the Sabarimala Karma Samiti and the Pandalam royal family, associated with the Lord Ayyappa temple, came down heavily on the state government saying there were discrepancies in the age of the women devotees mentioned in the affidavit.

They alleged that the LDF government was lying in the affidavit.

Pillai alleged that the government was 'lying' to the Supreme Court and 'fooling the people'.

He said there were reports coming out saying most of the women in the government's list were above 50 years of age.

"In case if anyone had visited the temple, they should have come openly. Everything should have been done in a transparent manner. The CPI(M) and the government had failed in the Sabarimala issue and this was an attempt to hide it. They are fooling people," Pillai told PTI.

The son of one Kalavathi Manohar from Goa told the media that the age of his mother was 52 and not 43 as the affidavit stated.

With more people contradicting the details in the affidavit, local TV channels claimed that the first two names in the list were fake.

"We don't know on what basis the government had given this submission. No one knew about their entry. Even the media was not aware about the visit," said Narayana Varma, a member of the erstwhile Pandalam royal family, associated with the temple.

The Congress also trained its guns on the LDF government, saying the state administration had became 'a laughing stock after submitting erroneous and misguiding affidavit'.

"This submission of wrong affidavit has brought shame to the state. The chief minister was responsible for this," Kerala Pradesh Congress Committee president Mullappally Ramachandran said.

Meanwhile, Bindu hailed the court direction to Kerala police to provide round-the-clock security to her and Kanakadurga.

"This is a verdict upholding the self-respect and pride of women," Bindu told reporters.

"We have faced threats, verbal abuse in social media. In such a situation, the verdict upholds the self-respect and pride of women", she said, adding, she had faith in the judiciary and the judicial system.

Bindu also claimed many people whom she knew had offered prayers at the Ayyappa temple, but were scared to reveal their identity fearing threats.

The two women had stepped into the hallowed precincts guarded by the police, more than three months after the apex court's historic judgment.

The note of the state government said that a contingent of four officers and one women police officer is on protection duty for Bindu and a mobile patrol moves round the clock near her house and surroundings.

"Kanakadurga, who is presently in the Calicut Medical College, after an assault on her by her mother-in-law is also provided protection of around 19 police officers, including women officers placed both inside and outside the ward. Her house is also accorded effective police protection," the note of the state government said.

Devaswom Minister Kadakampally Surendran said in that 7,564 women had registered online for visiting the hill-top shrine.

"As per the virtual 'queue' facility reports, 51 women between the age group of 10-50 have visited the temple. However, we don't know whether all of them have managed to reach the Sannidhanam (temple complex) and offered prayers or not," he told reporters in Thiruvananthapuram.

The state had witnessed widespread violent protests for several days from January 2 after the LDF government confirmed that two women of menstrual age entered the shrine.

Surendran said the government did not have the number of women who might have visited the temple without availing the online virtual queue system.

After the apex court verdict, the age of women pilgrims was not being cross-checked at Pamba which is around 4 km from the Sannidhanam, he said.

The minister said 8.2 lakh people passed through the virtual queue facility during this pilgrim season which began in November last year.